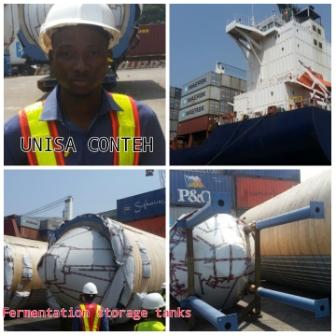 The press, together with the Corporate Affairs Assistant of the Sierra Leone Brewery Limited (SLBL), Unisa Conteh, on Wednesday 15th February,2017 paid an inspection visit to the Queen Elizabeth II Quay to inspect the huge fermenting tanks  imported by the company. The storage tanks are part of the brewery’s investment in its ongoing expansion program. The eight tank consignment includes:

The consignment which arrived at the Queen Elizabeth II Quay on Monday 13th February is in the process of being cleared. Other expansion program materials are on the high seas and are expected to arrive at the Freetown Port very soon.

With over One Hundred and Fifty Billion Leones (LE150Bn) invested in the country since 2014 to modernize and expand its production capacity, the Sierra Leone Brewery Limited (SLBL) is now set to more than double its annual production capacity. Through this extensive capital investment, SLBL will also be able to respond quickly to any increase demand for its products in the future. This is further capacitated by the brewery’s importation of new stainless steel fabricated fermenting tanks.

According to the new SLBL Managing Director, Daaf Van Tilburg, this massive investment showcases the brewery’s confidence in the economy. This investment he furthered comes at the right time as the brewery prepares to fully implement the Finance Act of 2016 which gives it impetus to meet the growing demand for its products in the country using locally grown sorghum.

He disclosed that when the new fermenting tanks are installed, the production capacity of the brewery will more than double the brewery’s annual production capacity. The tanks will also create the opportunity to brew, package and distribute all of SLBL’s award winning products which include Star Beer, Mutzig Beer, Guinness Stout and Maltina to satisfy current and future consumer demand in the country.

SLBL established itself in Sierra Leone as a manufacturer of alcoholic and non-alcoholic beverages just after the country’s independence, 54 years ago.

As a major employer, SLBL has been contributing tremendously to the growth of Gross Domestic Products in Sierra Leone. It has also been diligently performing its Corporate Social Responsibility in the community in which it operates as well as far and wide across the country.

As a dynamic corporate investor, SLBL continues to expand its operations through new investments and innovative equipments and production techniques in order to meet customer satisfaction at all levels.

As it seeks to substitute imported ingredients for the manufacturing of its products with locally grown ingredients, it has established strong working relationship with the Sierra Leone Sorghum Farmers Association to supply the brewery with locally grown sorghum. This has created employment and boosted the incomes of over 12, 000 contract farmers across the country. This relationship has greatly boosted the government’s agenda for prosperity drive.

According to SLBL, they have more than doubled the requirement for sorghum from farmers for 2017. This and other investment initiatives launched by SLBL will greatly contribute to the brewery’s volume growth ambition, create wealth for farmers, grow government revenue from their operations and generally have a multiplier effect on the economy.

The foundation for this development, the SLBL MD said, was set by the actions put in place by his predecessor, Willy Ngana, who has been transferred to the Africa Middle East Regional Office in Holland.