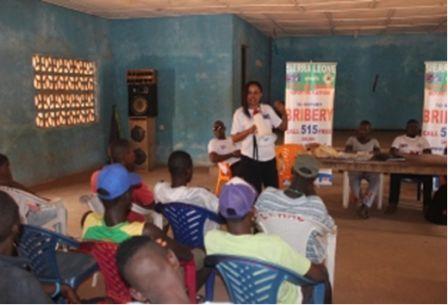 The people of Sussex village have pledged their unflinching support to the Pay No Bribe (PNB) campaign by resisting all forms of bribery. This pledge was made during an outreach meeting organized by the Anti-Corruption Commission (ACC) in collaboration with Campaign for Good Governance (CGG) on Saturday 4th February 2017 at the Sussex Community Centre.  The objective of the meeting was to inform the Sussex Community about the PNB campaign and the various mechanisms to report bribery.

Speaking on the PNB project, The Head of Outreach Unit, ACC, Glennis Kaitibi said the 2013 Transparency International (TI) Afrobarometer indicated that 83% of the respondents had either given bribe in order to access public services or had accepted a bribe. She noted that the PNB is mainly to reverse the trend of bribery in the country and at the end of the day would increase investor’s confidence and improve on the country’s rating. She said the PNB is a reporting platform which allows citizen to anonymously report incidences of bribery and corruption.  The campaign aims at improving service delivery in five key government institutions- Sierra Leone Police, Ministries of Health and Education, the Water and Energy Distribution sectors. She explained the effect of bribery and how it is affecting their community. She encouraged the people of Sussex to resist and  report corruption. Abubakarr Turay, Communications Officer, ACC, explained the benefits of the reporting bribery and the mechanism through which bribery could be reported. He said the 515 is anonymous reporting system wherein a person will not be identified which is different from the ACC reporting platform. Speaking on the significance of citizens’ participation, he informed his audience that the beneficiaries of the PNB are the citizens. He also called on the people to assist the Commission in tackling bribery and corruption by sending their reports to the Commission.

Speaking on behalf of Campaign for Good Governance, Sahr Kendema,   explained the mechanisms of the reporting platform. He said the PNB is designed to collect information on bribery and corruption in five key service delivery sectors. He informed the audience that the PNB is in a pilot phase and it covers four districts which are Bo, Kenema, Bombali and the Western Area. He informed his audience about how the data is analysed and sent to the respective MDAs.  Mr. Kendema called on the people of Sussex to embrace the project and report corruption as it will benefit all Sierra Leoneans.

The Chairman, Donald Claye who is also the Deputy Head man of Sussex Village thanked the Commission for such an engagement as they have never heard about the PNB. Mr Claye stated that it is very important to have the ACC in their midst as it is a clear indication that the Commission is reaching remote areas.