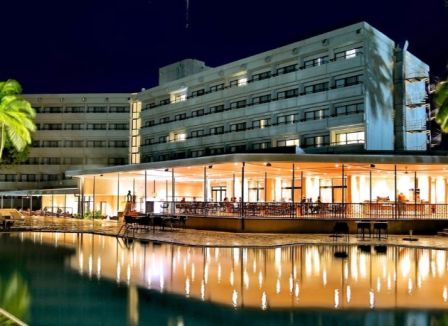 After successful discussions with the Mayor of Freetown, His Worship Franklin Bode Gibson, the General Manager National Tourist Board, Mr. Yassin Kargbo has announced new plans and strategies which are being implemented to develop the Lumley Beach further. (Photo: Radisson Blu Mammy Yoko Hotel, Freetown)

Among the new recommendations is the establishment of parking lots which would generate funds for the Board. He added that vehicle owners could park for a minimal fee of Le5,000 at weekends and on holidays and that this revenue would go directly into the Board coffers.

Another area which would generate revenue for the Board according to Mr. Yassin is in the area of towing vehicles stranded at the beach which would be done in collaboration with the Sierra Leone Road Safety Authority (SLRSA). He added that money collected in this venture would be shared between the SLRSA and the Board and the latter would use the amount deposited in their coffers to boost the operations of the Board.

Currently the Tourist Board has over 100 workers and there are plans to employ more workers to manage the other beaches in the capital. Part of the revenue collected would also be used to beautify the beaches further and also to buy more CCTV cameras to handle security in the area. All of these are aimed at complementing President Koroma’s Agenda for Prosperity.

On demolition, Mr. Yassin Kargbo maintained that the developer would start by 15th February this year and one of their first tasks would be to build a state-of-the art mall which would be first of its kind in Sierra Leone and would have an escalator.

As all of this is going on, the Hilton Cape Sierra Hotel will be finished and opened by December this year.  It consists of 200 bedrooms and 2 presidential suites.

The Noom Hotel is expected to be completed by the end of the year.

Mr. Yassin Kargbo maintained that all of these innovations, strategies and ideas are to enable Sierra Leone to be capable of competing internationally in the hotel and tourism industries.

Finally, a number of Beach Marshals will undergo three weeks training that would be done by the Sierra Leone Police.  The Beach Marshals are fed every day by the NTB.

What to expect of Paralegals with...