Build on Books hands over 3 Classroom Buildings to Kwama community 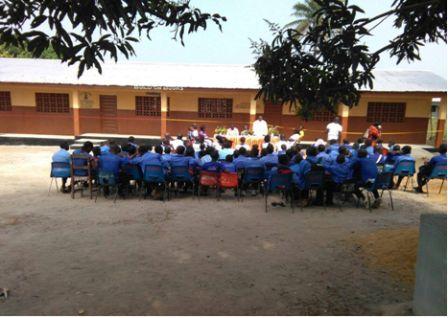 Build on Books hands over 3 Classroom Buildings to Kwama community

With support from Kitchen Tables Charities Trust, a non-governmental charitable organization, Build on Books over the weekend handed over a 3 classroom block to Our Lady of Kwama Primary School at Kwama Town, Western Rural District. According to reports, sitting accommodations and shelter became increasing demanded sequel to the Ebola and flood disasters that hit Sierra Leone, leaving many untold stories.

The Chairman Build on Books, Sierra Leone Chapter, Mr. Alphonsus Kargbo told our reporter that his intention is to make Kwama a ‘Centre of Excellence for Education’. Mr. Kargbo who doubles as Principal for St. Clement Secondary has the conviction for achieving quality education for that community. According to Mr. Kargbo, he has been the brain behind the project. “I encouraged overseas charities like Build on Books to donate to us and the community will lend a hand on any project that benefits them” he disclosed. He said UK charity Build on Books has been working with him and residents of Kwama on many occasions to build toilets, boreholes, community farms, providing a school science lab and even a goat shed.

Mr. Kargbo said “Together, Build on Books UK and Build on Books Sierra Leone have worked on many projects: from providing books for schools; farming; to building boreholes and toilets; and even fighting Ebola and rescuing orphans”.

He said recently, they renovated and reopened the operating theatre at the Waterloo Health Clinic and the construction of a canteen is ongoing at the St. Clement secondary school at Kwama to serve as Home Economics classroom and a community centre.

“We have just completed this urgently needed three classroom extension for Our Lady of Kwama Primary School which we are here to open today” he underscored.

In her statement, the Head Teacher of Our Lady of Kwama Primary School, Mrs. Sarah George said their school is a government assisted primary school, run by a local village management committee. The school she disclosed has 11 teachers and a head teacher. According to her, the school has a roll of 600 pupils and children from surrounding villages, such as Brama and Krossing as well as other outskirts communities benefit from its quality education.

She maintained that the school also renders pastoral care and excellent performance record. “The pupils reach a high level of literacy and numeracy despite the disadvantages of their background; 98% pass their exams” she said.

Further, he disclosed that the School admitted more than 200 children in 2016, mostly victims of the Freetown flood disaster who were relocated to Kwama Community by the authorities. “We gave them a warm welcome but the school became overcrowded” she disclosed adding that the construction of additional building by Build on Books, has ease the situation.

Chairperson and Founder of Build on Books Lori Spragg, aka Ya’Alimamy of Kwama and Ya’Kaindeh N’Gbon of Buya Romende Chiefdom informed our reporter, via a correspondence from UK that the locals were eager to have additional accommodation during her visit to Sierra Leone in March 2016.  “I spoke with the new pupils who said that they did not mind the cramped conditions as they were still being well cared for and receiving a good education” she disclosed. She said many of the children remarked that they were very fortunate to come to the school saying that they have many qualified teachers.

“The village children and teachers have welcomed the newcomers but without enough classrooms some children have had to sit outside on bamboo poles and concrete blocks under a tree” Lori recalled her visit.

According to her, in the classrooms five children could be squashed on to one bench and some children had to make do with concrete blocks to sit on. She disclosed that it was very unfortunate, that the school lacked well and toilets whilst admission continued.

“For me this was an emergency situation that needed to be addressed immediately” she informed pointing out that two large tents were provided by DFID on her request for temporary accommodation.

She said on her return, Build on Books team in the UK collected chairs, books and school supplies and shipped them over to the school in Sierra Leone to get the children off the concrete blocks.  On the Build on Books request, she said WASH consortium and Living Water immediately constructed toilets and the borehole for the school.

However, Lorri told this medium that during her search for help she came across Kitchen Tables Charities Trust which is founded by award winning UK television presenter John Humphries.

“His charity gives grants to organisations such as Build on Books to fund projects like the building of schools in poorer countries” she disclosed.

She said at the end of November2016, they finally received the funds to build the school. “It seemed like a miracle, Mr. Humphries’ team had told Mr. and Mrs. Ian and Kay Vickerage about Build on Books and our plan to build a three classroom extension at Kwama and they wanted to help” she informed. She went on; Kitchen Tables Charities Trust decided to help by funding all of the building of the three classroom block.

“The funding included all the materials, the feeding of the volunteers, and the skilled workmanship necessary to make the building strong and longstanding” she disclosed adding that, this is an extremely generous donation that we will all be eternally grateful for.