US$149m for reliable electricity supply in the Western Area 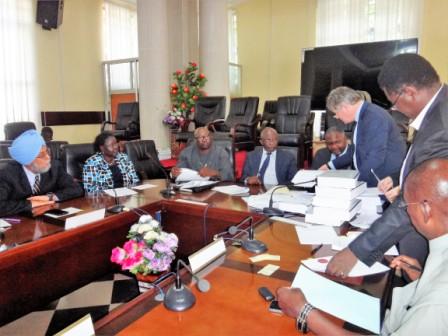 US$149m for reliable electricity supply in the Western Area

The Government of Sierra Leone, the Project Sponsors and the World Bank Group on Monday (January 23) officially executed the project and finance documents for the CECA Sierra Leone independent power project (CECA SL) under the Western Area Power Generation Project. The execution of documents, which took place during a ceremony held at the Ministry of Finance and Economic Development in Freetown, is the culmination of years of efforts, and clears the way for parliamentary ratification of the project documents.  (Photo: the signing process involving the Ministers of Energy, Justice, and Finance (representing the Government) and the World Bank)

The CECA SL generation project is a key component of the Government of Sierra Leone’s recovery plan to help support economic growth post-Ebola, and create jobs by providing reliable electricity services to the Western Area. The project is responding to an urgent need for additional generation capacity in Sierra Leone and is the most advanced power generation project currently under development in the country.

Speaking at the ceremony, the Minister of Energy, Ambassador Henry Macauley, stated that the Government through its various reform programs has improved the energy sector’s attractiveness for private investment by clearly specifying the rules of the game, improving the sector’s financial viability, and building the network.

He was very happy that this project is coming into fruition after years of negotiations. He particularly thanked the World Bank for its invaluable intervention and also thanked all other partners for their efforts and contributions. In his view the Government saw this project as providing the foundation and model for other Independent Power Projects (IPP) to follow.

The Minister of Finance and Economic Development, Momodu L. Kargbo, said the finalization of the project documents was a reflection of donors’ confidence in Sierra Leone, and noted that the project would go a long way towards meeting the power needs of the Western Area. The Minister stated that all stakeholders need to work together closely to ensure that the financial projections on which this project is based were not only met but exceeded so that the project had no negative impact on the country’s budget.

British High Commissioner to Sierra Leone, Guy Warrington, said he was very happy that the British Government has taken a controlling interest in the project, and that British tax-payers’ money was being used to augment the availability of electricity in the country.

TCQ’s representative, Karim Nasser, said he was grateful for the long hours and unending dedication brought to bear by the Ministers and their staff to bring the project to execution. “This has been a group effort, everyone has contributed, recognizing the importance of the project to Sierra Leone. This project reflects Government of Sierra Leone’s commitment to the people of Sierra Leone, and their needs.”

World Bank Country Manager, Parminder Brar, said the project was the first IPP of its kind in a fragile country like Sierra Leone, signaling an important step on the road to Sierra Leone’s recovery. He stated that there is no doubt that there will continue to be challenges associated with the project and the World Bank will continue to work side-by-side with the Government of Sierra Leone and all stakeholders to ensure this critical project is successfully implemented.

From the side of the World Bank Group, the Country Manager thanked the Ministry of Finance and Economic Development, the Ministry of Energy, the Attorney General, the Public-Private Partnership Unit of the President’s office, the UK Government and lenders for their support.

The World Bank Group’s support for the project will leverage US$149 million in investments into the power sector in Sierra Leone, and serve as an important signal for investment opportunities at a time when the country is in a fragile recovery from Ebola.

The International Development Association (IDA), together with its partner institutions – International Finance Corporation (IFC) and the Multilateral Investment Guarantee Agency (MIGA), are providing guarantees and lending to the project, as follows: a US$40 million IDA guarantee made in support of CECA SL Generation Limited, that backstops payments to be made under a long-term Power Purchase Agreement (PPA); IFC financing that consists of an A-loan in the amount of US$27 million; and MIGA guarantee cover of up to US$60 million.

Build on Books hands over 3 Classr...