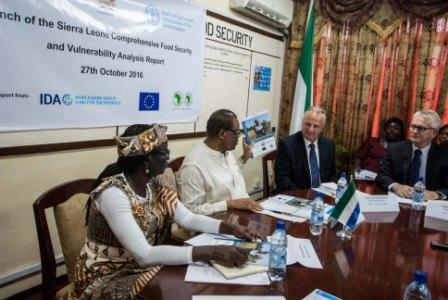 FREETOWN, 27 October 2016– The State of Food Insecurity in Sierra Leone report launched today by the Government of Sierra Leone, the United Nations World Food Programme (WFP) and the United Nations Food and Agriculture Organization (FAO) shows more than half of the population – over 3.5 million people – are food insecure, without access to a sufficient amount of safe and nutritious food. Of these, about 600,000 are severely food insecure, eating significantly less food and less varied and nutritious food, and unable to cope with new shocks such as drought, floods and fluctuating food prices. The number of severely food insecure people has increased by 60 percent since 2010.

The report is the culmination of a Comprehensive Food Security and Vulnerability Analysis (CFSVA) of over 34,000 households across Sierra Leone’s 149 chiefdoms and 18 urban wards, making it the largest food security assessment of its kind in the country.

In his keynote speech at the launch ceremony, the Minister of Agriculture, Forestry and Food Security (MAFFS), Professor Monty Jones, said the government was committed to doing what it takes to transform the agriculture sector into an engine for socio-economic growth.

“The findings of the CFSVA will assist my ministry to design, target and implement programmes that will improve agriculture production and productivity, enhance commercial agriculture, create employment and enhance skills of farmers in a number of areas. We will encourage private sector investment and involvement to improve access to inputs and markets for our farmers. The government and development partners have a key role in designing sound agricultural policies and programmes to effectively meet the priorities of the Government’s National Ebola Recovery Strategy,” he said.

Out of 149 chiefdoms and 18 urban wards surveyed, 110 chiefdoms had food insecurity levels above the national average of 50 percent.

While the Ebola outbreak accounted for the decline in food security in some districts, notably Kailahun and Kenema, in the majority of districts, food insecurity is a chronic problem, caused by structural factors that affect the food production system and limit the ability of households to produce or buy enough food.

“The results confirm that drivers of food insecurity are low agricultural productivity, poverty and a lack of resilience, poor road and market accessibility, gender inequality and a lack of income generation diversification. The negative socio-economic impacts of Ebola further exacerbated food insecurity. While the majority of the population relies on agriculture for their livelihoods, the report shows that only 4 percent are growing enough rice to meet their needs for the whole year, and rice production has decreased nationwide by 15 percent over the last five years,” said Nyabenyi Tipo, FAO Representative in Sierra Leone.

The analysis shows that on average, only 4 percent of farmers use chemical fertilizer, 10 percent have access to improved seed varieties, and 99 percent use manual tools. Very few households are engaged in fishing or livestock rearing. To sell or buy food, households in rural areas have to travel almost eight miles, or one and a half hours, to reach the nearest market.

“Sierra Leone now has unprecedented insight into its food security situation, with data available at the chiefdom level for the first time. This allows the humanitarian and development community to zero in on the most vulnerable, allowing us to use our resources more efficiently to improve food security, strengthen livelihoods and build resilience to recurrent shocks”, said Peter Scott-Bowden, WFP Country Director in Sierra Leone.

“With the adoption of the Sustainable Development Goals (SDGs), the findings also provide accurate baseline data for government and development partners to gauge progress in achieving SDG 2 ending hunger,” he added.

WFP and FAO are supporting the Government of Sierra Leone to bridge the gap between local food production and national demand. The recommendations of the CFSVA underscore the urgent need for an increased investment in sustainable agriculture and rural livelihoods.

The 2015 CFSVA was financed by the African Development Bank, the European Union and the World Bank. Thirteen local and international NGOs provided technical assistance, in-kind and cash contributions to support the exercise.