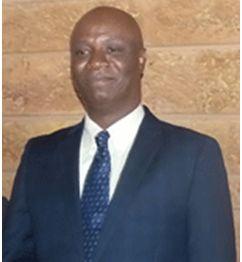 It was on Friday 9th September 2016  at the Madruga Awards, the Chairman of  National Telecommunications Commission (NATCOM), Momoh Kemoh Konte was awarded as Personality of the Year and NATCOM as Best Parastatal of the year because of his stance on the excesses of phone companies, plus the successful restructuring of the commission coupled with current respect the commission enjoys internationally. Presidential Legal Adviser Yusuf Bangura, Journalist Ibrahim Samura and host of others also received the prestigious Madruga Awards. (Photo: Momoh Kemoh Konte, committed to serve)

NATCOM was awarded as best Parastatal of the year whiles Lawyer Kabaka as Lawyer of the year and Ibrahim Samura as best independent Journalist 2016.

NATCOM under Momoh Konteh has been locally and internationally acclaimed for doing things in the improvement of the county’s communications system.

That NATCOM in the recent times has increased its revenue for government and the Commission.

And that over the years, the Commission has taken stuff stances against mobile companies found in default of the laws, or have been seen fleecing people of Sierra Leone of hundreds of Millions.

Lawyer Kabaka, on the other hand, received the award as Lawyer of theyear for his outstanding performance in the legal profession.

He is founder of the Kabaka Chambers, a legal firm that has been dealing with numerous legal issues in the country.

He is also the Public Relation Officer of the Sierra Leone Bar Association and has been championing human right issues of the association months past.

Lawyer Turay, passionate about child right issues in the country and of course a member of the Board of the National Children Commission meritoriously was awarded for services rendered.

On receiving the award, Turay said: “I dedicate this award to the Children of Sierra Leone, more so those Ebola orphans.”

Journalist Ibrahim Samura was also awarded for his outstanding and self-determined journalistic performance in the enhancement of democratic good governance as he checks the powerful few on behalf of the many to guide against tyranny.

Also awards included the Presidential Legal Adviser Yusuf Bangura, the Minister of Political and Public Affairs Nanette Thomas, and the African Young Voices Television among others.