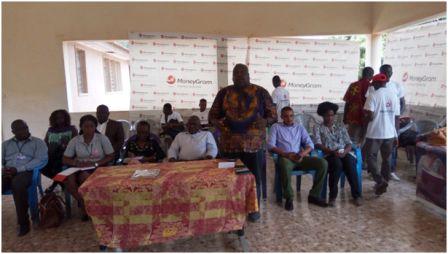 The donation came in the wake of an upsurge of basic food and commodities prices in the local market and the dire need for the provision of food for the welfare of the inmates of the home.

The presentation of the food items to inmates of the King George’s Home for the aged an intervention MoneyGram  has been undertaking to salvage the plight of the home and has been happening every year with this year not being an exception.

Food items including bags of rice and onions, palm oil, oil, cartoons of tomatoes, assorted provisions given to individual inmates of the home while other items were handed over to the management of the Home.

Madam Sandra Johnson, Council Member of Home expressed appreciation to the management of MoneyGram and its agents for coming to their aid especially in these trying moments. She said the Home mostly experience shortage of relevant food items which poses a challenge to them as managers in keeping the old people in the home.

“King Georges Home is a voluntary organization that provides care and shelter for the aged. We are supposed to be getting support from government but that is not the case; we only rely on donor supports and aid we are getting from organization like MoneyGram,” she says.

Desmond Finney, Deputy Managing Director for Premier Media, the marketing and communications agency for MoneyGram in Sierra Leone lamented that MoneyGram provides access to financial services for consumers and businesses around the world within ten minutes. He added that with ease and reliability people can send and receive money anywhere in the world quickly, reliably and at a more affordably rates.

He refers to the gesture as a usual pilgrimage undertaken by MoneyGram, noting  that the visit will also give people at the home opportunity to make their plight known to the press, government and the private sector.

He tells the gathering that MoneyGram has not only demonstrated its commitment in providing the fastest means of money transfer within and out of the country but giving support to the Old People’s Home has over the years been a key social corporate responsibility of MoneyGramin Sierra Leone.

He assures that the donation of food items is just part of many more goodies to come as long as people continue to use MoneyGram as a channel of money transfer.

Among representatives of four of MoneyGram’s agents who were at the ceremony, Mr Abdulai Sesay from SLCB said that MoneyGram has always offered outstanding facilities to its customers, especially the ten minutes duration in which transfer is done.

Representatives of other agents including, Guaranty Trust Bank, Keystone Bank and Afro-International made similar sentiments about the importance of MoneyGram operations in their institutions.

MoneyGram services, available in 200 countries and territories and in approximately 350,000 locations around the world and are trusted by tens of millions of consumers everywhere. 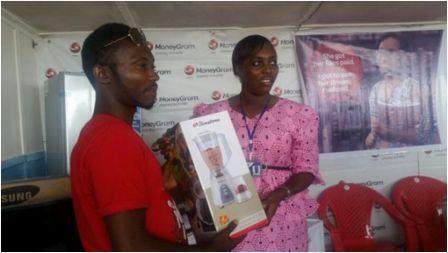