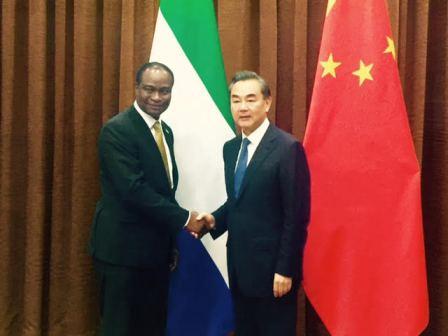 I have had the opportunity of interviewing Dr. Samura Kamara twice as Sierra Leone’s Foreign Affairs Minister. I must admit he has always proven to be an intellect, one with a sound resume of performance, with outstanding local and international reputation, but extremely unassuming on all fronts.

This didn’t come as a surprise given his excellent pedigree and strapping underpinning in diplomacy, macroeconomic, public finance and financial sector policy analyses and reforms. As former Financial Secretary, Bank Governor, Finance Minister and now Foreign Minister, he has, over the years, earned himself tremendous respect both within and out of the country especially within the context of development cooperation institutions like the World Bank, the IMF and the EXIM Bank, a key Chinese development cooperation mechanism.

China visit amidst 45 years of ties:

On the invitation of his Chinese counterpart, Wang Yi, Dr. Kamara was in China from the 13th to the 16th of June, for discussions on bilateral and multilateral cooperation as both countries mark 45 years of ties at the diplomatic level.

Forty-five years of relations have, in the words of the Foreign Minister, “proven to be mutually beneficial and based on mutual respect”, a statement corroborated by his Chinese counterpart, who said his country attaches “great importance to the bilateral relations with Sierra Leone.” Sierra Leone and China have come a long way in terms of cooperation. The need to further these ties at the diplomatic and people-to-people levels is crucial. Sierra Leone views “China as a trusted and reliable partner”, said Dr. Samura Kamara, Making specific reference to how China intervened and supported Sierra Leone defeat the Ebola virus.

In 45 years, China’s intervention in Sierra Leone, “is clearly visible in particularly all sectors of the economy”, underscored Dr. Kamara during his meeting with his Chinese counterpart, Wang Yi. Sierra Leone continues to provide the enabling environment for the growing number of Chinese investors in the country. The Chinese, on their side, have explicitly made clear their commitment to supporting Sierra Leone’s drive to a developed nation.

Dr. Samura Kamara has been at the centre of this project since he first signed the initial MOU six years ago as Finance Minister. Government sees the Mamamah Airport Project as being very important, with great potentials for the country’s future growth. As said by Dr. Samura Kamara, the President Koroma, Dr. Ernest Bai Koroma has never hidden the fact that the project holds the future of Sierra Leone. The airport’s transformational impact on the country’s economy should not be downplayed also taking into account the high expectations amongst Sierra Leoneans that the construction will soon commence and completed as early as possible.

Funding for this project comes from China, through EXIM Bank. Exim-Bank is the world’s third largest export credit agency, with a mandate to “implement state policies in industry, foreign trade and economy, finance and foreign affairs.”

The IMF/World Bank had had few concerns. But I am pretty certain those concerns have been clarified following the visit to China by Dr. Samura. Contrary to local media reports, the Government did not go against the advice of the World Bank and IMF. The Government continues to work with them and have all come to terms with the need for such a laudable project. As institutions, they have a responsibility to help countries develop “but to develop in a way that protects their fiscal exposure and their capacity to be able to harmonize any borrowing…they agreed that the new airport project is a national project”, said Dr. Samura Kamara, in a recent interview. Sierra Leone only needed to be clear about its economic viability as well as its stability within the context of the country’s debt sustainability analysis.

The visit provided the platform for further negotiations. The initial loan provided by the Chinese, Dr. Samura Kamara explained, was not concessional, meaning it did not meet the 31% grant elements. Government had to impress on the Chinese side that “based on Sierra Leone’s debt sustainability analysis, we have to negotiate to make the loan concessional at the minimum level and that was achieved. There also was the issue of Net Present Value, which defines the ability to repay. Negotiations have been completed for the loan to be as concessional as possible, so as not to undermine the country’s ability to repay after the grace period.

At the multilateral level, Sierra Leone notes the ongoing tensions between China and her sister nations along the South East Asian Pacific, primarily around the South China Sea. The country has made clear it position which gives support to China, also “urging for space to allow the parties to settle their disputes through bilateral and regional mechanisms.” The country advocates the need to support all parties directly concerned “to solve the evolving territorial and maritime disputes peacefully through friendly consultations and negotiations in accordance with international law, bilateral agreement and provisions of the Declaration on the Conduct of Parties in the South China Sea”

Sierra Leone is Coordinator of the AU Committee of Ten Heads of State and Governments on the reform of the United Nations Security Council. China has continued to give both “proactive and invaluable support” to Sierra Leone for the common African Position and to the work of the C10. It is hoped, this will continue given China’s special ties with the continent.

The visit by the Foreign Chief has helped accentuate further areas of development cooperation between the two Republics. As Dr Samura Kamara said, “the combined effect of Chinese public and private sector enterprise engagement in Sierra Leone has helped lay a solid foundation on which the country can achieve the development and prosperity it is yearning for in the ensuing years.” The ties of cooperation in 45 years have also been of outstanding help. The Chinese have demonstrated their admiration of Sierra Leone’s growth trajectory, through the Agenda for Prosperity. They have made clear their will to always stand by the country. The explicit commitment to further enhance Sierra Leone’s human resource development is gleaming, since practical cooperation is very important in the foiled of diplomacy.

That President Xi Jinping takes the construction of the new airport as key to his government is touching. Interventions in areas of water and rice/tuber cooperation are also strategic. That more attention would be given to capacity building in the health sector comes at the right time given our recent past experience and challenge we went through. There is the aspect of youth development and the Chinese intervention. The South Africa FOCAC Summit was a comprehensive strategic partnership, both nations have agreed, through recent bilateral talks in Beijing. The need to now inject more energy into strengthening the relations between Africa and China with the FOCAC framework cannot be overemphasized.

Overall, the visit helped in opening more windows of opportunities and further cooperation between the two nations. Dr. Samura Kamara has made an impact again!