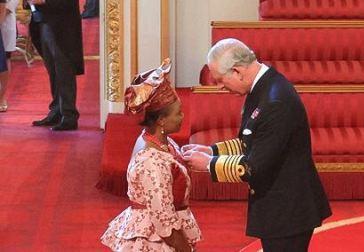 Sierra Leonean born Clinical Nurse Specialist, Augusta Tina Davies has been awarded the Order of the British Empire (OBE), in the New Year’s Honours list 2016 of Queen Elizabeth II.  Ms. Davies received the honour for her services to the Ebola response in Sierra Leone, as Head of Psycho Social Pillar at the National Ebola Response Centre in Freetown.

She was also presented with a Gold Medal for her service during President Ernest Bai Koroma’s Ebola Honours Awards Ceremony on 18 December 2015. Mrs. Davies, has a strong clinical background as a nurse trained and practiced in the U.K, attained the positions as Senior Nurse, Nursing Sister and Manager, Clinical Nurse Specialist (fertility and breast cancer care). Lived in the United Kingdom for 18 years before returning home in 2013 just before the outbreak of the Ebola Virus Disease. She volunteered at the Ministry of Social Welfare, Gender and Children’s Affairs for a few months, and was later hired as Child Protection Consultant for a UNICEF funded project. As the only female National pillar lead in the Ebola Virus Disease response since June 2014, Mrs. Davies successfully coordinated all activities in the districts, covering affected communities, orphans and survivors. She highlighted the role of women in getting to resilient zero of Ebola transmission, and maintained data of all affected children including orphans and survivors. Advocate for survivors highlighting the health and psychosocial challenges survivors are facing.

Leading anti stigma campaign against survivors and Ebola orphans in Sierra Leone Mrs. Davies was the brain behind the introduction of Observation Interim Care Centres  (OICC) for contact children without adult care giver whilst their parents were either in holding or treatment centres. The OICC served as quarantine for children. She also collaborated with partners to develop and produce a National Psychosocial Manual for Ebola, which was widely used in Sierra Leone to provide psychological first aid through counseling and the provision of food and non-food items.

An expert in disaster management, Mrs. Davies also used her Ebola experience to set up and manage the flood command Center at the National Siaka Stevens stadium with support from the British Army and DFID, this command centre was replicated in other flood centres. The centres provided emergency services to thousands of residents who were displaced by heavy floods in Freetown. She was presented with a certificate of merit by the Sierra Leone government for her dedicated services to flood victims.