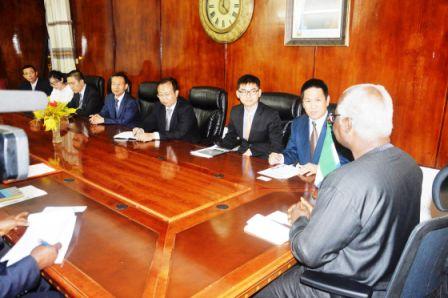 President Dr Ernest Bai Koroma has reiterated government’s commitment towards the construction of the Mamamah International Airport during a meeting with representatives of the Ministry of Commerce of the Peoples Republic of China at State House today June 8, 2016.  (Photo: President Koroma addressing the Chinese delegation in a meeting at State House)

“We still want the airport to be constructed and if it is relocated to the mainland it would have great outcome for the country’s growth,” he said.

The delegation is in the country to advance discussions on the proposed Mamamah International Airport project as well as the establishment of a Centre for Disease Control and Prevention.

The president underscored the significance of the visit, while vividly reflecting on his last meeting with President Xi Jinping at the United Nations General Assembly in New York where he reiterated the Chinese government’s continued willingness and determination to provide solutions to whatever difficulties militating against the commencement of the project.

President Koroma informed the delegation that the nation is yearning for the relocation of the airport to the mainland, indicating that if the facility is relocated it would have a huge impact on the country’s national development trajectory. He expressed optimism that the visit will work towards something conclusive on the Mamamah International Airport within the year.

President Koroma said government has not made any arrangement anywhere for the proposed project as “we are still committed to the full implementation of the project which is why you are here to advance discussions on the way forward.”

Head of delegation and Director in Charge of Assistance for West African Countries, Mr Suo Debo said they were in the country to negotiate with the government of Sierra Leone on the Mamamah International Airport as it is an important project to both China and Sierra Leone. Mr Debo hoped that their delegation together with government line ministries will continue to receive fruitful deliberations and achievements on the project before returning to China.

The delegation is also expected to hold separate discussions with the ministers of Finance and Economic Development, Transport and Aviation and Foreign Affairs and International Cooperation.

It could be recalled that in a recent speech during a stopover meeting with traditional leaders at Masiaka, Port Loko district, President Koroma assured the nation that the Mamamah International Airport project is not dead as being perceived by detractors, but is still very much alive and will soon be transformed into reality.