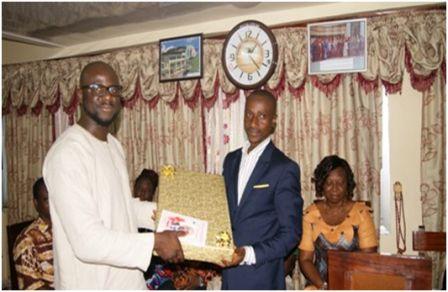 The Anti-Corruption Commission (ACC) on Friday 27th May 2016 bade farewell to Hon. Justice Abdul Rahman Mansaray Esq. at the Conference Room of its 3 Gloucester Street Office.

Speaking at the valedictory ceremony, the Commissioner of ACC Ady Macauley Esq. thanked Mr. Mansaray for the services rendered to the Commission selflessly. He described Justice Mansaray as unassuming, firm, straightforward and sincere. Commissioner Macauley maintained that, as a High Court Judge, Mr. Mansaray  will advance the course of justice as injustice is rife in society.

In his submission, the Director of Prosecutions ACC, Calvin Mantsebo Esq., stressed that Justice Mansaray is leaving behind a legacy that would be remembered for a long time; the cases he has successfully prosecuted and his good human relations. Mr. Mantsebo furthered that Mr. Mansaray’s move to the Judiciary will add immense value to the work of the Commission.

Responding High Court Judge, Hon. Justice Mansaray said it was moment of thanksgiving since he has passion for justice. He assured all that the confidence reposed in him will not be misplaced. He solicited the support and prayers of all ACC staff that would make him strong to discharge his duties fairly and honestly.

Hon. Justice Mansaray joined the Commission in February, 2011 as prosecutor and worked tirelessly, diligently and assiduously to bringing the corrupt offenders to justice. He was senior prosecutor at the ACC, until his promotion as High Court Judge in April, 2016. He  successfully prosecuted ACC cases in Freetown and the Northern Region.  He gained considerable wealth of knowledge in the anti-corruption fight.

The ceremony was graced by Directors, Deputy Directors, Managers and Heads of Units of the Anti-Corruption Commission.

Towards sustainability of African...