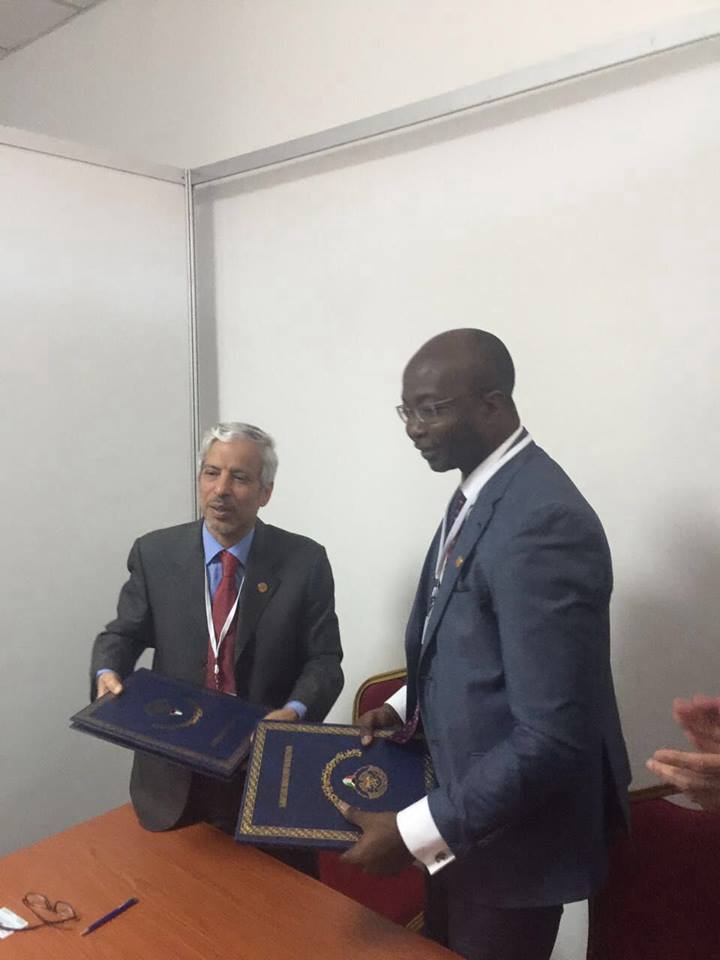 In its continuous drive to seek for investment opportunities into the country and funding for the ongoing road infrastructure projects of the Government of His Excellency, Dr Ernest Bai Koroma, President of the Republic of Sierra Leone, the Sierra Leone Mission in the State of Kuwait led by Ambassador Ibrahim Bakarr Kamara, after a series of engagements with senior Management of the Kuwait Fund for Arab Economic Development, has succeeded in getting the Board to approve a Loan for the completion of the Hill Side Bye Pass Road Project in Freetown. (Photo: Dr. Patrick Saidu Conteh right Minister of State after the signing agreement)

The signing of the said loan agreement was done on behalf of the Government of the Republic of Sierra Leone (GoSL) by the Honourable Dr. Patrick Saidu Conteh, Minister of State in the Ministry of Finance and Economic Development. The signing ceremony took place on the side lines of the just concluded African Development Bank (ADB) Meeting, held in Lusaka, Zambia on Tuesday 24thMay 2016.

In addition to the Hillside Bye Pass Road, the Embassy is also working vigorously with the Kuwait Fund to conclude the signing of the loan for the completion of the Tokeh/Lumley road project which has already been appraised by the Fund.

The completion of these two massive road projects in the Western Area, Ambassador Kamara said, will go a long way in easing the east/west bound traffic in Freetown, movement to the provinces as well as tourism promotion along the Freetown Peninsula.

In another related issue to foster development in Sierra Leone’s post Ebola recovery efforts by Government, the Embassy has also concluded the commencement of another major project with the Kuwait Fund in the health sector, for the construction of a blood bank and three hospital buildings at Kerry Town, Lumley, Macauley Street Satellite Clinic and Waterloo, respectively, including medical and non-medical equipment.

Civil works have started in earnest on these projects. Upon completion, the Ambassador added, these projects will hopefully help strengthen the country’s health sector and improve the provided medical services, thereby contributing towards the building of a healthy and productive nation.

Reacting to the signing of these projects, the President of the Sierra Leone National’s Union in Kuwait City says, the Mission in Kuwait, under the leadership of Ambassador Ibrahim Bakarr Kamara, should be commended for its successful negotiations which have culminated into the signing of such significant projects whose effect would definitely be palpable on the ground.

No doubt, Sanussie Jalloh noted, the health sector is a very important branch of any infrastructural developments in any country. “Thus, having a robust and well-equipped health sector in Sierra Leone is the hope and prayer of every well-meaning Sierra Leonean,” he concluded.

Towards sustainability of African...