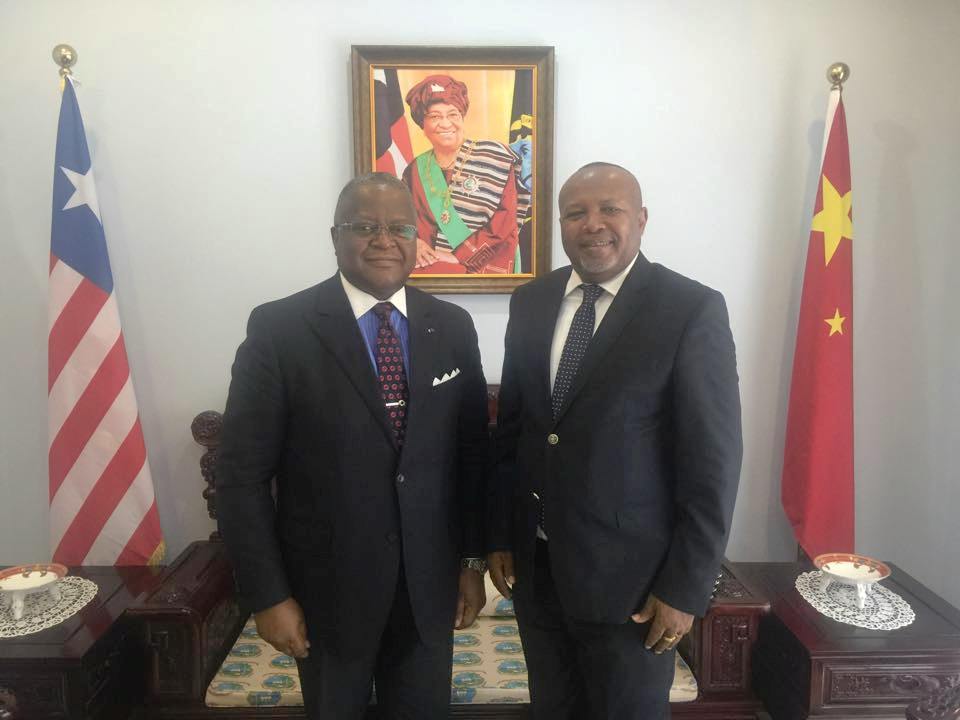 Ambassadors of Guinea, Liberia and Sierra Leone to China have supported calls for the revitalization of the Makona River Free Zone Development Project, which was jointly conceived by the embassies of the three countries based on the practicalities of the traditionally thriving cross-border large-scale trading and peaceful co-existence that existed between the communities of the three countries, along the Makona River.  (Photo: Amb. Koroma and his Liberian counterpart to China)

The renaissance call was initiated by Ambassador Alimamy P. Koroma on Monday, 30th May, 2016 during separate courtesy calls on the Ambassadors of Guinea and Liberia to China, Dr. Ibrahim Sory Sow and H.E D. McKinley Thomas, respectively.

The three Ambassadors agreed that their countries have continued to enjoy and benefit from admirable bilateral relations on account of the long time-honored history of friendship and thriving cooperation in aspects of   economics, trade and investment.

In his statement, Ambassador Koroma underscored the economic and cross border potentials that the Makona Sub regional Project would have.

Though China is also dealing with Nations at the bilateral levels, Ambassador Koroma said, the MRU Nations should speak with one voice along the framework of a sub regional project as that would make much impact and get the Chinese support at the multilateral level of development cooperation.

The three Nations of Guinea, Liberia and Sierra Leone, Ambassador Koroma said, are so intertwined and closely related, that it would be fruitful and strategic useful closer cooperation and collaboration, promising to further discuss the issue with his Ivorian counterpart.

AP Koroma with the Guinean Amb. to China

The Liberian Ambassador in his remarks, expressed optimism, that with Ambassador Koroma’s wealth of experience as ex Minister of Trade and Infrastructure, a lot could be achieved by the MRU .“We need to work closely as MRU Ambassadors on the Makona Project, in addition to our individual country projects”, he said.

China, he said, would give attention to a sub regional project “which will also be of mutual benefits to the people of the MRU Nations”, he said, also assuring Ambassador Koroma of  further discussing the issue with the Ivorian Ambassador.

The Guinean Ambassador, Dr. Ibrahim Sory Sow on his part also supported calls for the revitalization of the project, emphasizing that it “would be of economic importance to the MRU countries.”

Initiated in 2013, the Makona Project is in tandem with two of MRU’s four identified growth triangles, with broad objectives of accelerating the socio-economic development of the three Nations; promote the development of infrastructural facilities, create a regional mining corridor and promote urbanization and intra-regional trade

It was conceived in line with the wider vision of China-Africa relations as outlined in the Beijing Action Plan (2013-2015) of the 5th Ministerial Conference of FOCAC in which, the Chinese Government and Enterprises were in support of the development of overseas business cooperation zones established in Africa.

The Presidents of Guinea, Liberia and Sierra Leone had early given their approval, with directives for their embassies in Beijing to work on further project proposals and approach the Chinese side for possible intervention.

The Ebola outbreak in the three MRU Nations amongst other factors, affected the efforts to push the project.