Mohamed Yongawo says he will be in power come 2018 SLPP 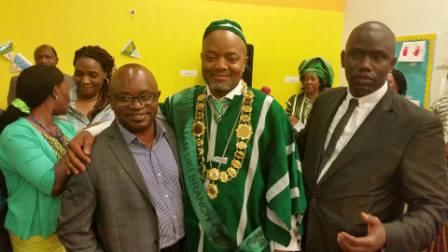 Mohamed Yongawo says he will be in power come 2018 SLPP

During the campaign, he campaigned on three distinguished features that set him apart from his contender – competence, integrity and commitment. But majority who voted for him were convinced about one thing: that Mohamed Yongawo is a man who keeps his word.

So on Friday 20th May 2016 at the auspicious handing-over ceremony in London, the new SLPP UK/I Chairman Mohamed Yongawo had one vow to make to the SLPP faithful: “come 2018 SLPP will be in power”.

The vow by Chairman Yongawo reverberated the hall with applause and energised the crowd. It is the type of vow every well-meaning SLPP will welcome from a politician who wants to focus on the big issue. Even few in the hall who might not have voted for him loved what they heard – a brave and serious SLPP politician who is poised for the return of SLPP to governance.

To illustrate the motto of one country one people, Chairman Yongawo also particularly praised and showcased his Vice Chairman, Chernor Atumani Dainkeh, a temne by tribe and a man who hailed from Gbinti,Dibia Chiefdom, Port Loko District.

But Chairman Yongawo also exposed the myth that he was not voted for by what few referred to as “Alliance Members” when he singled out for praises members of the Team Alpha Timbo UK/I who were present in the hall in great numbers. He thanked them for their commitment to the party.

Chairman Yongawo was magnanimous in his victory and told the audience “My team is going to reach out to every SLPP member with a simple message that there is a place for everyone under the palm tree”. Yongawo also call for unity and said that as a party we have to be one another’s keeper.

However, Chairman Yongawo was also very stern when he asserted that we need to instil discipline in the party. He went on: “We are not going to allow anyone to take us back. Those who don’t want to move with us forward, the party will be moving forward”.

The handing over ceremony was conducted by the council of elders while former Party Chairmen -Jimmy Songa and Harold Saffa – were given the honour of dressing incoming Chairman Yongawo with the regalia of the office of the Party Chairman.

In his brief remarks, outgone Chairman Songa called on Chairman Yongawo to always listen to the general membership of the region and to build on the legacy he had left. It can be recalled that outgone Chairman Songa recently won a court case and order for cost at Lambeth County Court against few members who took the SLPP to court.

The members of the Electoral Commission distributed certificates of service to members of the incoming executive and majority of the general membership praised the electoral commissioners for the professional and competent manner they organised the election in compliance with the SLPP UK/I 2014 constitution. The Chairlady of the electoral commission, Mrs Sue Bockarie also delivered a short remarks and thanked the general membership for their high participation during the election.