Pharmacy Board destroys Drugs worth over Le 180 Million 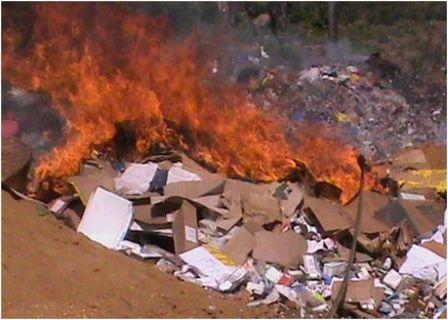 Pharmacy Board destroys Drugs worth over Le 180 Million

Makeni, May 20, 016 (MOHS) – The Pharmacy Board of Sierra Leone on Thursday May 19, 2016 destroyed counterfeit, expired, unregistered, deteriorated, and classes A and B drugs worth Le 185,000,000 at the Makama dumping site in Makeni, northern Sierra Leone.  Photo depicting destruction of the drugs

Making the symbolic fire destruction of the medicines, the Acting Minister of Health and Sanitation, Madam Madina Rahman condemned the sale of drugs by peddlers noting that they create problem for the people that consume these medicines as well as for both themselves and the health system.

She expressed concern over the proliferation of fake drugs in the market places, the streets and unregistered enterprises, and called on the City Councils to assist the ministry in the area of issuing eligible permits to peddlers.

Madam Minister noted that the peddlers are untrained and unqualified, not trained to deal with medication and yet deals with medicines that pose a threat to public health.

In his remarks, the Registrar Pharmacy Board of Sierra Leone, Mr. Wiltshire Johnson described the event as an occasion to apex the work of the ministry within the framework of public health by ensuring that only good quality medicines are sold on the markets of the northern region and across the country.

He disclosed that the destruction process covers counterfeit, sub -standard, expired, and medicines retrieved mostly from drug peddlers which serve as a clear dangerous indication to public health. The peddlers in question, Mr. Johnson said sell medicines beyond their knowledge, noting that these are the very crop of people that are ranging havoc particularly in the interior of our rural communities.

Mr. Johnson further disclosed that plans are currently being put in place in collaboration with the ministry for people to access information at community medicines point in towns and villages, and appealed to stakeholders, community leaders and the press to join them in the fight.

Similar destructions were done in Bo, Kenema, Kono, and the Western Area with this estimated cost.

With Trans-world Insurance Co, you...

Mohamed Yongawo says he will be in...

Problem of fake medicines in developing...