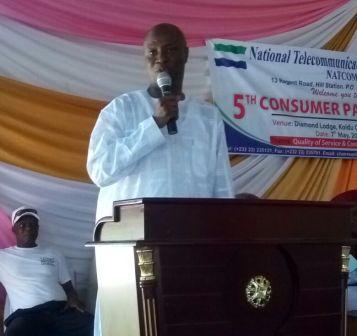 The National Telecommunications Commission (NATCOM), over the weekend organized its 5th Consumer Parliament Conference in the diamondiferous district of Kono.

Alex Mansaray reports, the conference which took place at Diamond Lodge Hotel in Yomba Lucy Memorial Hall, Ngaya, Kono district, on Saturday, May 7th 2016, was attended by hundreds of consumers, Internet Service Providers (ISP), mobile phone operators in the country, NATCOM officials, parliamentarians and top government officials to chat the way forward on how to improve the telecommunications industry in the country.

Speaking at the conference, the acting Director General of NATCOM, Senesie Kallon, said that NATCOM had brought together all the ISP, mobile phone operators, and consumers to discuss issues affecting the industry and to chat the way forward to ensure effective and efficient service delivery in the country.  He added that the customer conference was to give opportunity to the consumers to express their views on the operations of mobile phone companies and internet service providers in the country.

Mr. Kallon furthered that since the appointment of Mr. Momoh Kemoh Konte as Commissioner of NATCOM, the Commission has made tremendous progress in the country.  He added that they are working in one spirit to achieve their goal.  Making a statement at the ceremony, the Commissioner of NATCOM, Momoh Kemoh Konte, informed that since government liberalized the international gateway, it has increased cumulatively incoming and outgoing international calls to 10% to 15% respectively and that the rate of international calls has also reduced drastically.

Mr. Konte noted that there are several challenges in the sector and that the president and the Government of Sierra Leone are committed to ensuring that the rate of using phone drops drastically.  He told his audience that SIM Box Fraud affects the country’s revenue collection base a lot and threatens the peace of the nation.  He admonished operators to ensure that all SIM cards going out are registered so as to prevent security risks like terrorism.

NATCOM, according to him, is currently working with the Sierra Leone Cable Network (SALCAB) to take the fibre cable to schools so as to provide e-learning facilities.  He also spoke about the Commission’s intention to help GSM companies expand their network across the country.

Mr. Konte expressed happiness that by the end of the year internet service will increase to 4% from the 0.5% he inherited.  Hon. Binneh Bangura of the Parliamentary Committee on Information and Communications said they had been enjoying a good working relationship with NATCOM and the Ministry.  He heaped praise on all mobile phone companies for their good role played during the fight against Ebola and for continuous provision of quality, reliable and affordable communication services to customers.

“The Parliamentary Committee is very impressed with all the mobile operators operating in the country,” Hon. Binneh Bangura said.

Minister of State East, Karamoh Kabbah, underscored the importance of quality communications services which he said enhances national development.  He however emphasized that being that GSM companies are contributing a lot to national development; they should try to make their customers enjoy the services they are paying for.

Minister of Political & Public Affairs, Madam Nannette Thomas, noted that the government of President Koroma is committed to meeting the needs of the people. “President Koroma is a man of vision that is very determined to make sure Sierra Leone becomes a paradise,” she said.

Minister of Information and Communications, Mohamed Bangura, disclosed that his ministry has enjoyed a good working relationship with NATCOM.  He pledged government’s political will to strength communications services in the country.  He divulged to his audience that presently, government is generating the highest revenue from mobile operators.

The Consumer Parliament was first held at the Miatta Conference Hall in Freetown in 2009 and has further taken place in Bo, Kenema, and Makeni cities.  It serves as a given opportunity to the consumers to express their views on the operations of mobile phone companies and internet service providers in the country.

Last year one major resolution which was passed was that all mobile phone operators charge in Leones rather than units which the companies have complied with. 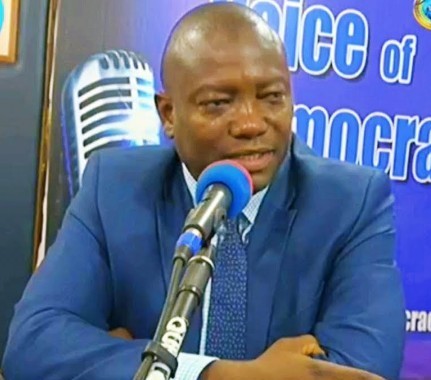