Celebrating the anniversary a day after the event, the Chairman of the Foundation, Alfred Rogers, thanked community leaders for giving them the opportunity to host such event in their community.

He said the Founder and Chief Executive Officer of the organization, Princess Imambay Kadie Kamara (in photo), cares about orphans and their foster parents, hence the need for her to hobnob with them, while admonishing them to be appreciative of the little they get.

In her keynote address, Princess Imambay Kadie Kamara thanked all and sundry for gracing the occasion, noting that the vent was part of the organization’s annual events.

She made it emphatically clear that their intention was not political but to help the less privileged in society.

Madam Princess Kamara encouraged the foster parents to lean on her as plans were in the pipeline to help them with micro finance scheme that will help them in offsetting some of the difficulties encountered on a daily basis.

She furthered that her organisation will kick-start the scheme with a handful of foster parents but will however increase the number based on the sincerity and cooperation from both the foster parents and the committee that will be set up for the said purpose.

Chief Kandeh Turay of the Cool Town Community joked that good visitors should always be welcomed with smiling faces.

The traditional leader lamented that many Non-Governmental Organisations (NGOs) has failed them but however encouraged the community to try the Disabled International Foundation Sierra Leone.

Cool Town Chairlady, Mabinty Turay, stressed that though Ebola orphans are many in their community, it is only is only the Disabled International Foundation that has come to their aid. She prayed that the organization will continue to grow from strength to strength.

Mabinty encouraged foster parents to use the proposed micro credit judiciously as any attempt to misuse such opportunity will greatly hinder the children’s future.

Pastor Joseph Conteh admonished Imambay Kadie Kamara to continue the good work as anything she does to the least child in Sierra Leone; she will be doing it for God, noting that her prayer for God’s provisions is already answered.

Disabled International Foundation Sierra Leone National Coordinator, Donstance Koroma, noted that DIF-SL is a disabled focused organisation but has shifted its operations from disability to Ebola orphans and their foster parents since the outbreak of the Ebola Virus Disease (EVD) in the country.

He said the organisation is very serious about making a change in the lives of Ebola orphans by providing their basic necessities with equal opportunities.

Men for All Season donates to over... 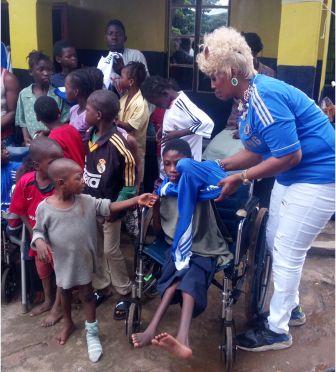