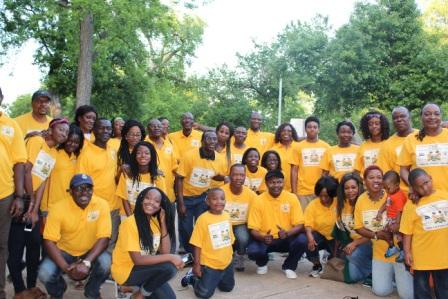 While the nation, back home and across the globe commemorating the 55th Independence anniversary on April 27, the Sierra Leone community in the Dallas Fort-Worth area set aside this date, April 30, to fit the mold of the vast majority of Sierra Leoneans in the city to celebrate and reflect the history and identity of Sierra Leone cultural heritage.

The event had lots of great activities slated, however, including, soccer tournament, picnics, beauty pageant show, costumes contest, and award ceremony. Mrs. Zainab Sesay of Z-International was the host for the beauty pageant and costume contests. It was the first time this fashion of celebration was introduced in the Independence anniversary. It attracts hundreds of Sierra Leoneans and other nationals jam-packed Pastor Simson’s hall at the city of Garland.

It was a dramatic twist in her imagination, Ms. Zanab Sesay of the Z-International evolving to make the night event looks more amusing and pleasant. Teens and adult women groomed into the pageant queens with fantastic presentation of splendid African attires. There were some latest fashion trends in the costumes presentation that represents different personal tastes and provides different experiences from the designers.

Ms. Zainab Sesay’s energy and enthusiasm as Master of Ceremony MC, keeps the audience in the pageant show awaken all through the night. She recognizes the presence of the Honorary Consul General, Mr. Patrick Jackson and presented some organizations that represented in the event as, the Mandingo Association and the Limba organization.

The Ms. Sierra Leone for the first time pageant show 2016 in Texas was Amanita Tommy from Bo District. In two weeks, Ms. Sierra Leone is graduating with an associate degree from Richland community college to become a registered nurse.

The event also climaxed with an awards ceremony. The Sierra Stars Soccer Association deemed it necessary to recognize and applaud Sierra Leoneans who already are making a positive difference in the community.  The president of Sierra Stars, Mr. Patrick Dangawalli told me that the club passionate interest is to inspire others to think about how they might contribute to the Dallas Fort-Worth community for development.

The recipients for this year’s community award were Mr. David Kessebeh, the Executive Director of Sierra Care Inc. and Mr. Sanpha Sesay, the community PRO and the author of this article. A plaque in recognition of his assistance to the underprivileged back home and his commitment to promote soccer in the community was conferred on Mr. David Kessebeh. In appreciation of his rich contribution to the community in especially performing the public relations (PRO) duties, a magnificent plaque was conferred on Mr. Sanpha Sesay AKA the Texas Chief.

Soccer trophies award were also presented to the winning teams by Mr. Patrick Dangawalli, the president of Sierra Stars.  Three teams from different countries, The Gambia, Liberia and Sierra Leone participated in the soccer tournament. Undoubtedly, Sierra Stars of Sierra Leone won the tournament first place after defeating The Gambia team by a lone goal. An elegant trophy was bestowed upon the stars the winner of this year’s soccer tournament for the 55th Independence anniversary.

The Independence day is considered to patriotic holiday that many people believe can provide the community an opportunity to interact and perform national identity and belonging. The community here in Dallas Fort-Worth believes that the transformation of Independence Day celebrations sheds light on the development of our country and Sierra Leoneans living in the Diaspora. It gives insight on the formation of a national identity as Sierra Leoneans in the United States.

Unity is the biggest challenge among the Sierra Leonean communities across the United States. Sierra Leoneans, however, should continue to be proud of their heritage/culture in Texas with unity and diversity without fragmentation that shifts focus from the established unity based on a mere tolerance of our cultural, social, religious, and political  ideologies. Despite some differences towards a more complex unity based in understanding especially our political differences, but no differences can divide us as Sierra Leoneans in the Dallas Fort Worth.