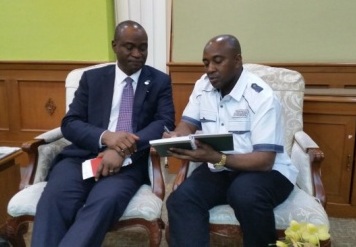 Sierra Leone’s President, His Excellency Dr. Ernest Bai Koroma undoubtedly has the tenacity and wisdom to bring onboard his administratively talented compatriots capable of transforming the vision for Sierra Leone into reality. (Photo: Dr. Samura gives interview in Jakarta after bilateral meetings)

It is no gainsaying that, since he took over the mantle of leadership in September 2007, unprecedented development in various sectors has taken place in Sierra Leone and this could only be attributed to the support coming from some giftedly-shrewd technocrats within his administrative dispensation.

One of such able technocrats is no less a person than the Minister of Foreign Affairs and International Cooperation, Dr. Samura Wislson Kamara. He is a consummate development practitioner and diplomat, whose high sense of commitment and dedication to duty coupled with his sterling track record of high quality performance duty call is not only revered by his compatriots but is also being recognized and respected in International circles.

Dr. Samura Kamara has won commendation as one of the most versatile officials in the current administration who, by virtue of his strong grounding and seasoned operational expertise in key development issues such as macroeconomic and financial policies; governance and development financing has always made a valid and convincing case for the country in different international platforms/seminars. And the just concluded Fifth Extraordinary Organization of Islamic Cooperation (OIC) Summit on Palestine and Al-Quds Al-Shariff hosted in Jakarta, Indonesia where he represented President Koroma from 6th -7th March, 2016, was no exception.

Dr. Samura has ever been a jewel in the crown of President Dr. Ernest Bai Koroma’s administration since 2007 where he served as Minister of Finance and Economic Development and made a niche in financial agreements on behalf of Sierra Leone.

He was the main architect behind the development and articulation of the Poverty Reduction Strategy Paper I (PRSPI) that had a productive impact on other key stakeholders from both within and without. He was also part of the negotiation team that won Sierra Leone’s huge debt cancellation from the International Community in 2007, just before the Presidential and Parliamentary elections.

In 2007, President Dr. Ernest Bai Koroma at that crucial time, when the global crunch was hitting the entire world, appointed someone familiar with the world economy; he found that person in Dr. Samura Kamara.

Kamara also headed the Central Bank at a time when the external economic forces were gaggling developing countries that largely depended on external budgetary support for the financing of a greater percentage of their national development programmes.

He was a paragon of virtue in strategizing the rapid economic growth of Sierra Leone which eventually led to the successful implementation of President Dr. Ernest Bai Koroma’s ‘Agenda for Prosperity’ between 2007 and 2012 and his second inning as President of the Republic of Sierra Leone. He also contributed to the restructuring of the country’s economy by championing the merger of Income Tax Department with Customs and Excise for an effective and efficient revenue collection into the National Revenue (NRA).

Following his re-election in 2012, President Dr. Ernest Bai Koroma saw the necessity of appointing his right-hand man to the Ministry of Foreign Affairs and International Cooperation; this time, to leverage Sierra Leone’s voice, development priorities and comparative advantage on the global level. This is what Dr. Samura Kamara has been doing with distinction over the past three years and the country has benefitted enormously from his shrewd diplomatic prowess.

During the just-concluded summit in Jakarta, he thrilled OIC leaders, diplomats and the international community with awe-inspiring references, timely pauses, and dazzling choice of words, which left the audience regularly interrupting with a tumultuous burst of applause. The Foreign Affairs Minister recounted progress made in defeating the deadly Ebola virus Disease that struck in May 2014 and completely reversed the accomplished gains. He went on to call for more international support for the implementation of Sierra Leone’s post-Ebola Economic Recovery Program.

The Foreign Minister’s intervention was received with thunderous applause from the audience as he articulately made the case for the OIC to be the requisite space and visibility to continue to play a greater role in the search for a just and lasting solution to the Palestinian Question based on the two-state solution, with Israel and Palestine side-by-side within secure borders and in peace.

At the end of the summit, Dr. Samura held a joint news conference with his Indonesian counterpart, where he was mobbed by admiring journalists and other participants that had special admiration for his persuasive presentation. Other pressmen and the paparazzi, who felt they were missing out on the action, had to run after him for extended interview and get a snapshot.

Dr. Samura Kamara also held important bilateral engagements with few member states on the sidelines of the Summit on a wide range of issues including deeper bilateral cooperation, trade and investments, the post-Ebola Recovery Programme in Sierra Leone, and the Security Council reform process.

After the bilateral meetings, I sat down with Dr. Samura Kamara for a brief interview. On the meetings he had, he described them as “very successful”. In his meeting with his Indonesian counterpart, Dr. Samura said they discussed steps relating to the deepening of the bilateral relationship between Sierra Leone and Indonesia within the framework of South-South Cooperation.

Indonesia, he added, has approved the opening of a Sierra Leone Embassy in Jakarta and that they (Indonesia) have also agreed to appoint a non-resident Ambassador to Sierra Leone who is to be based in Dakar, Senegal.

“We have chosen Jakarta not only because it is part of Indonesia, but also because it will soon become the center of the South -East Asia region, where there are bigger markets to enter,” the Minister told me after his bilateral meeting with his Indonesian counterpart, Minister Retno Marsudi.

The two Foreign Affairs Ministers also agreed to promote the economic relations in the ASEAN rim and the furtherance of investment opportunities in Agriculture, tourism, fisheries, among others.

Agriculture Minister assures of “a... 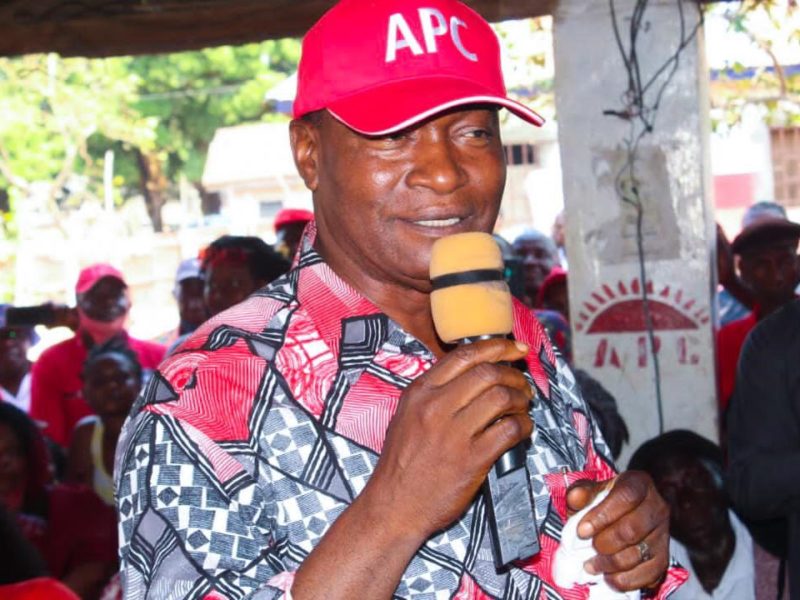