Agriculture Minister assures of “a comeback in the Agricultural Sector” 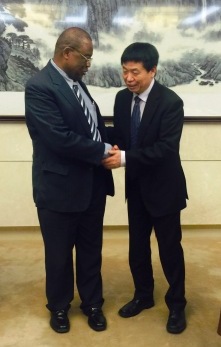 Agriculture Minister assures of “a comeback in the Agricultural Sector”

Sierra Leone has a vision of making the agriculture sector the ‘engine’ for socio-economic growth and development through commercial agriculture and the promotion of private sector investment in it.  (Photo: Professor Monty Jones and the Chinese Vice Minister of Agriculture. )

In a 2009 address to the Sierra Leone Chamber of Commerce, President Ernest Bai Koroma said the goal was for us to move away from “subsistence to commercial agriculture, agro-processing, adding value to our agricultural products and realizing maximum benefit from the richness of our soil.”

During the 2010 Business Bomba Competition Final, the President called for a rise in agricultural production, productivity, and competitiveness in the sector “because it touches the lives of so many Sierra Leoneans.” Since then, government has taken the sector as one of several priority sectors, in the country’s drive to sustainable development.

The sector accounts for 70 percent of the country’s labour force and contributes over 40% to  Gross Domestic Product.  However, the Ebola outbreak in the second half of 2014 adversely affected production and productivity. The country’s Ebola Recovery Strategy, says “the total national crop production of 2.09 million tons in 2014 was a decrease of about five percent from production levels in 2013. Production of the main staple crop, rice, is estimated to have declined by eight percent.”

What is being done to remedy this challenge, given the tremendous resources Government has put into the sector?

Professor Patrick Monty Jones is Sierra Leone’s Minister of Agriculture, Forestry and Food Security. Being the only African member of the Board of the Chinese Academy of Agricultural Sciences (CAAS), he was recently in Beijing for the 4th International Advisory Board Meeting of CAAS from the 17th-18th March, 2016. He has been a member of the Board since his days at the Forum for Agricultural Research in Africa.

CAAS meets annually. The 2016 meeting looked at the program of CAAS and discussed how it could collaborate with International Institutions.

In this interview, Professor Jones elaborates on the vision of His Excellency President Ernest Bai Koroma for the agriculture sector. He also assures of “a comeback in the agricultural sector”

First, he explains how his meeting in China could benefit Sierra Leone especially in the country’s drive to sustainable development through the agriculture sector.”

Minister: It would enhance strong collaboration with Africa and with Sierra Leone in particular because I am the only African in the Board. And they gave me a list of 17 areas of possible collaboration which includes fellowships and that is the first thing that I would want to pursue. Fellowships would benefit Sierra Leonean youths that want to come for their first or higher degrees. They want to collaborate with us in various aspects of Rice Research, Rice Development Programs, Rice Production and Adding Value to commodities like rice, etc.  In that regard, I think this will be of considerable benefit to Sierra Leone. It will be of considerable benefit to them also since when you collaborate it is going to be a win-win situation. We looked at the possibility of establishing a Rice Farm in Africa. CAAS is in a position to give assistance. Sierra Leone is in a position to receive assistance and at the same time, to render services to CAAS that will eventually make CASS a beneficiary as well.

Following your appointment as Minister, you went on a tour across Sierra Leone. Why was that?

There were a lot of issues. The tour was to carry out sensitization and familiarization. I have gone to the 14 Districts of the country, including the Urban and Rural Areas. The farmers are making demands from government on issues related to use of machinery, supply of fertilizers; etc. There are a lot of other issues they brought up to me for discussions.  I took the opportunity of talking to not just the farmers but also Researchers, Agriculturists, ministry personnel, NGOs, Donors, etc, explaining the vision of His Excellency the President particularly to the farmers and to those involve in agricultural production.

You mentioned the President’s vision for the sector. What is it?

The vision of His Excellency the President is to increase production and productivity. Our productivity is very low even compared to other countries in Africa. Even when we were at the same point with Mali, some years back, Mali’s stable food-rice is getting something like 4 tons per hectare and we are still talking about 1.2 tons per hectare in lowland system and 1.2 tons per hectare in upland system. So we need to do what we should do, to promote agricultural development. In fact, we are going to take commodity by commodity to see how we can work through the value chain to increase production and productivity. Through the value chain means, we have to go from Research, to Extension, to Adaption, to Value Addition to Market. The commodities we are going to target are rice, our stable food, then cassava and sweet potato and cash crops, including cocoa, coffee, oil palm, ginger and cashew, and poultry, cattle and forestry as well. We’ll look into all of these commodities and first of all, try to ensure self sufficiency in each of them and find ways of adding value to them for international and domestic markets.

Great plans, but what about granting loans and supply of fertilizers to farmers where possible?

Part of the message we have been passing to the farmers is like encouraging them, giving them hope that there is a brighter future for them and for agricultural development. Generally, we tend to be misguided sometimes. I will say when we’re talking about machinery, people think of big combined harvesters, big tractors, etc. But I feel that with the sizes of farms in Sierra Leone (two hectares, maximum five hectares), only occasionally do you have the big time farmers that go above 50 hectares, a thousand hectares, etc. Until you have 20, 000-50, 000 hectares, you don’t need combined harvesters or big tractors. Rather, you need power tillers, small threshers, etc. These are the kinds of machinery that we’ll bring to the farmers this time, as well as making available to them fertilizers and seedlings.

And talking about loans, that is why we created the Apex Bank. In fact, we have a project that I just signed off on from which will be making something like 12 million dollars available to the Apex Bank so that the Apex Bank will pass on that money to what we call the Financial Services Agencies and then the Community Banks. These Community Banks would now pass on these loans to farmers.

But how effective are these Community Banks?

Some of the Community Banks were not giving loans to the farmers. They prefer giving these loans to traders and others because our farmers have defaulted in paying back in the past. So one of my messages going round was to talk to them to pay back their loans; talk to them not to be afraid to take loans. All those big American or Japanese Famers you see started by taking loans. But you must have that discipline to be able to pay back your loan for the fund to be revolving and getting back to other people. The first thing is to make sure that we make available those machinery that the farmers want and we are concentrating on that.

How strategically positioned is your ministry in the post Ebola recovery plan?

His Excellency the President, apart from the Agenda for Prosperity, has come up with the Presidential Post Ebola Recovery Plan. Agriculture is heavily involved in that plan. We are looking at two very important results- improving agricultural production and productivity and enhancing commercial agriculture. We had three additional results. If we pursue those things, we’ll begin to see a comeback in the agricultural sector.  Why import rice when you have the facility to grow enough rice in the country? Why import onion which can grow and in one season you can meet the demand of the country and have a surplus? Why import vegetable oil when you can grow crops that will enable you to produce your own oil? Even from oil palm, we can get vegetable oil as well. Stop the importation, as much as possible reduce it to the minimum because there’ll always be some level of importation. But you don’t have to spend US $156 million annually to import rice. And only about 12% of our cultivable area in the country is under cultivation today.

Research is crucial in ensuring a comeback in the sector. What is the link between your ministry and the Sierra Leone Agricultural Research Institute (SLARI)?

SLARI is a quasi governmental institution and it is under the umbrella of the ministry. We’re working closely with them. We’ve discussed their strategy and how they should adopt what we call the value chain approach, mentioned earlier. At every stage of the value chain, SLARI has got a role to play; to identify what are the key commodities, what are the pathways for adoption, what are the pathways to the market and how do we increase yield of those commodities, etc. SLARI should not work in isolation of other entities like Extension, Engineering and all of those groups. They should work together in a much more collaborative, integrated fashion and in much more innovative ways and approaches that will ensure maximum impact on the ground. SLARI is going to play its role and all these trips I made to every corner of the country, SLARI has been there with me.

If you should have a 24 months target in your new job, what should the public expect?

We are vigorously trying to see how we can be self-sufficient in rice. I’m looking at that same period, towards end of 2018 when we’ll say yes, we’ve been able to attain food self sufficiency and be able to flood our markets with domestic rice. We’re looking at coming up with a big project by September-November this year. The investor just left Sierra Leone. He wants to come and cultivate 100,000 hectares of rice, engage 17-20,000 farm families. But that’ll eventually affect about 85-100,000 farming communities in Sierra Leone. That’ll make tremendous improvement. He wants to use irrigated scheme, and he is looking at Tormabom area and we’re trying to convince him to also look between Lunsar and Makeni, there is a span of bolilands, so that we can see how we increase production and productivity.