In her remarks, the Auditor General, Lara Taylor-Pearce, said it was with pleasure that she presented her second report on the Management of Ebola Funds for the period under review.

She conceded that she was encouraged by the significant improvement in the overall audit outcomes compared to her previous reports.

The Auditor General attributed the improvements to strong drivers of internal control being supported by commendable leadership and governance structures during the period under review, adding that the day-to-day internal control disciplines were enhanced and monitored by the Fiduciary Agent employed by the Government of Sierra Leone.

In its summary findings, the report highlighted that majority of the comments and recommendations made by the Public Accounts Committee (PAC) on the previous Ebola report have not been implemented by the concerned institutions or officers.

The report sighted the recommendation made that Mr. Charles Mambu repays the loan of Le160.9 million within a month after the adoption of the Audit Report, but there was no evidence to indicate that this was done.

The previous report also stated that the PAC urged NERC and the Ministry of Health and Sanitation (MoHS) to fast-track all outstanding payments to suppliers after the adoption of its report, but the new report states that it is far from being completed.

The report furthered that it was recommended that the National Revenue Authority (NRA) performs its mandate and ensure the collection of all outstanding taxes withheld or supposed to have been withheld, but noted that ASSL has not been provided with any evidence to indicate that such outstanding taxes have been recovered.

The report observed many lapses in the way and manner fixed assets were managed and controlled by both NERC and MoHS as the former did not ensure that majority of its vehicles and motorbikes were registered, licensed and insured.

he report also observed that NERC had no policy in place for the management and use of its fixed assets as assets register presented by NERC did not cover furniture and fittings, computers and other equipment that was bought by or donated by international partners for its operations.

The report pointed out that vehicles and motorbikes that were controlled by NERC were not available for physical verification.

It furthered that the MoHS did not provide the audit team with a list of vehicles, ambulances and motorcycles that were transferred to NERC and other Ebola-related institutions.

The audit team was also unable to see a structure plan or basis upon which those assets were distributed by the Health Ministry, while it also revealed that processes of some procurement actions were not open, competitive and transparent control measures that were supposed to be instituted when procurements were made in an emergency situation were completely ignored.

The report pointed out that certain bids were neither evaluated nor the evidence of procurement committee minute to justify the selection of contractors.

It also disclosed that payment of Le840 million to Mac Med Investment on 21st November, 2014 for the supply of discharge package to survivors in the region was in excess of Le80 million, noting that the withholding tax of Le40 million was added to the contractor’s total cost of Le800 million instead of it being deducted at source from the actual cost.

The audited report indicated that the Le500 million was paid to Catherine Catering Services for the supply of food to specific Ebola centres in Bombali District even though the fiduciary agent that was responsible for certifying payments could not rely on the payment request made by the contractor.

MoHS, the report went on, did not ensure that adequate funds were available within its coffers prior to initiating procurement proceedings hence the Ministry is still owing some contractors US$488.28 million and Le887,123,914 for goods and services and works projects which have been delivered and completed to specifications as there is no evidence that the MOHS is dissatisfied with the delivery.

Also, payment amounting to Le2,120,471,750 was made from the Ebola Response Account for food items without adequate documentary evidence such as receipts, distribution lists and delivery notes.

Withholding taxes which amounted to Le67,187,725 in respect of payment made for goods, services and accommodation, were neither deducted nor paid to NRA.

Monthly progress reports as dictated by the employment contract agreement were not done by the consultant during the audit period.

Le7,767,185,043 which has been unclaimed that is held in the wallet of the mobile commerce partner (MCP) for period up to April 2015, has still not been returned to the emergency response account. More on the report in a subsequent edition.

For Gov’t’s new system of payment,... 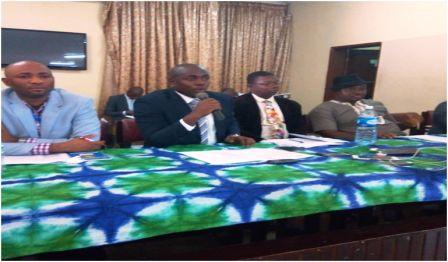