Sierra Leoneâ€™s Ambassador to the Kingdom of Belgium and the European Union, Dr. Christian Sheka Kargbo has described Sierra Leone as a paradise on earth and extends an open invitation to all, especially the Europeans whoâ€™ve never been there to visit the country and prove a point.Â (Photo: Ambassador Kargbo addressing guests at the garden of his residence whilst his wife Mrs. Rosemary Kargbo looks on)

Dr Kargbo was addressing invited guests at his official residence in Brussels during a reception to mark Sierra Leoneâ€™s 49th Independence Anniversary on April 27th.

Guests listening to the Ambassdor's remarks

He expressed his thanks and appreciation to his colleague Ambassadors, diplomats and the cross section of the Sierra Leonean community in Belgium, Holland and France who graced the occasion.

The Ambassadors of Gambia, Gabon, Benin, Secretary General of the African Caribbean and Pacific (ACP) Dr. Muhammad Ibn Chambas, Diplomatic staff of the Embassies of Nigeria, Malawi, representatives of King Albert, the King of Belgium, Executives of the Sierra Leonean communities in Holland, France, Antwerpen and a host of other dignitaries graced the occasion.

Mohamed Teslimi Bangura, aka Medoski, President of the Sierra Leone Central Union in Holland described the day as â€œwonderfulâ€. He confessed that for the past 15 years heâ€™s been in Europe, he has never witnessed such a gathering organised by the Sierra Leone embassy to commemorate the countryâ€™s independence. He called on his counterparts residing in Holland, Belgium, France and Luxembourg to come together for what he described as a â€œgrand style 50th Anniversary celebration next yearâ€.

He praised the Ambassador for his innovation since he assumed office in 2008 and his participation to their programmes. â€œThis Ambassador is always prepared to honour every invitation we extended to him. Now we feel that we have a father at the embassy and our association is very much determined to work with him for the progress of our countryâ€, Bangura said. 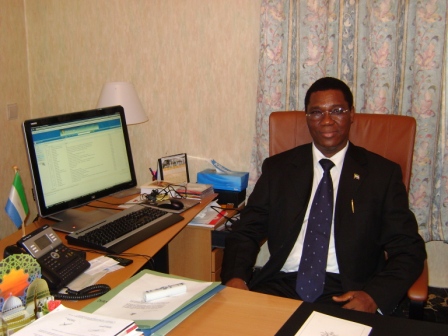 Sierra Leone’s Ambassador to Brussels re...