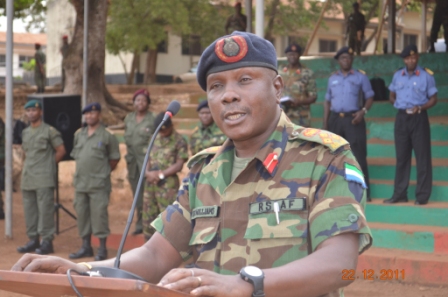 The Chief of Defence Staff (CDS) of the Republic of Sierra Leone Armed Forces (RSLAF) has disclosed that the devastating effect of the Ebola epidemic grounded their annual activities to a halt.

Making the disclosure yesterday in a news conference held at the Ministry of Defense conference room at Tower Hill in Freetown, the CDS, Lieutenant General Samuel Omar Williams (in photo). however, assured that all RSLAF activities will commence this year.

The Army Chief also disclosed that no promotions were made since there were no vacancies in the RSLAF, adding that they will only promote deserving officers from junior to senior ranks based on the stipulated conditions as prescribed by the institution.

Lt. Gen. S.O.S. Williams maintained that they are trying to march up with the terms and conditions of service of the Force as they are very critical to the functions of the Force, noting that a committee has been set to look into the issues for onward transmission to the Work Defence and Policy Committee for attention.

He said the RSLAF continues to benefit from   career courses for junior and intermediate, senior staff courses abroad and peace support training courses at local and international levels.

The army boss however disclosed that Sierra Leone Battalion (Leo Bat) dropped from peacekeeping operations around the world before the outbreak of Ebola epidemic and were not allowed to relocate their contingent.

Speaking on Infrastructure, The CDS disclosed that the construction of army barracks in Kambia to host a battalion will commence mid June this year, while Depot Barracks at Daru is undergoing refurbishment with plans to deploy two Medical Officers and nurses at the medical facility there.

He said phase one accommodation of fifteen structures with three apartments at Gondama Barracks has been completed with the commissioning ceremony slated for 26th February this year, adding that the ceremony would be graced by the Minister of Defense, Major (Rtd.) Major Alfred Paolo Conteh.

The CDS furthered that both Wilberforce and Benguema Barracks are also addressing accommodation problems, noting that yesterday RSLAF handed over the extended water dam to officers of the Barracks.

He also disclosed that after two years the Ministry of Defense (MoD) will celebrate the Armed Forces Day and this year’s cerebration will take place on 18th February, while the annual athletics meet of all brigades nationwide will also take place this year.

Lt. Gen. Williams however highlighted the lack of capacity to conduct air and maritime patrols and failure by the media to crosscheck their information were identified as some of their challenges.

Salone Got Talent to organize stro... 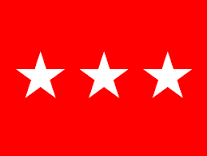 Parliament Approves New CDS and 9 Others