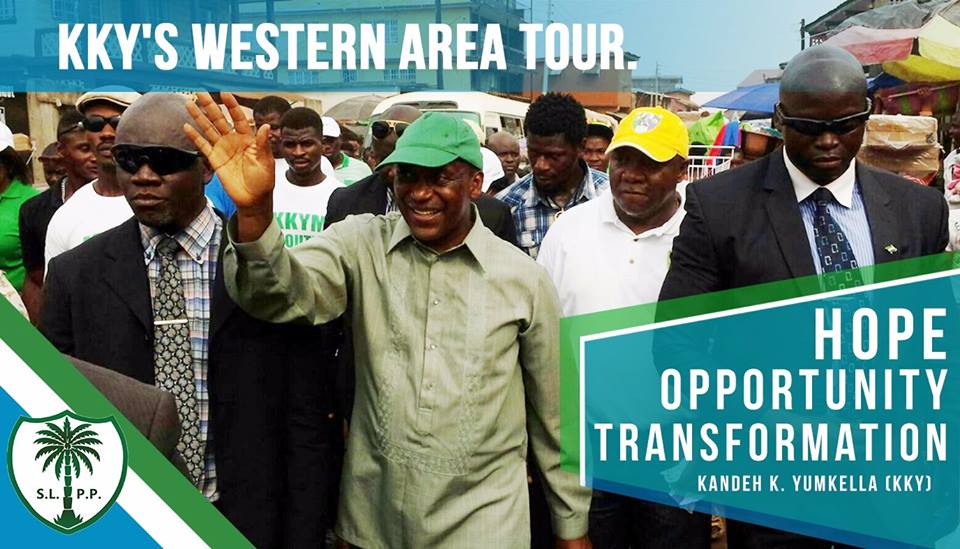 Despite the Sierra Leone Police (SLP) has been rascally reluctant to issue police clearance to the Kandeh Kolleh Yumkella Movement (KKYM) which the latter had applied for repeatedly to kick-start campaign for the flag-bearer contest in the main opposition Sierra Leone People’s Party (SLPP), Alhaji Dr. Kandeh Kolleh Yumkella has defied all odds to exercise his democratic right as a peaceful citizen of Sierra Leone by embarking on familiarization tour in the Freetown Municipality. During his first tour of the capital with a large entourage last week, the SLPP flag-bearer aspirant visited many communities and business centres where he interacted with many Sierra Leoneans who have been yearning to see him in person. According to reports, Alhaji Dr. Kandeh Kolleh Yumkella started his tour of Freetown at the Edwards Street community hall by Krootown Road where he summoned party members and supporters and appealed to them for peace and unity to be restored to their beloved party. On that day, he and entourage visited many others places including the Kroobay Community, Belgium, Sweizzy, Magazine Wharf Community, Hagan Street, Guard Street, Eastern Police, Sani Abacha Street, Lumley Street, Short Street, Back Street and Salad Ground where the tour eventually ended on that day. (Photo: KKYM Facebook)

But what came out clearly during Alhaji Dr. Kandeh Kolleh Yunkella’s tour of the capital is that his popularity has started growing rapidly among Sierra Leoneans especially the exuberant young businessmen and women at Abacha Street where bold women took out their ‘lappas’ and spread them on the ground for the flag-bearer aspirant to walk on amidst jubilation and negative chants against the current regime and Maada Bio, who they vowed not to vote for should the SLPP choose him as their presidential candidate for the 2018 presidential election.

Alhaji Dr. Kandeh Yumkella was also hailed at Belgium and Sweizzy by young people who appealed to him to be making such visit to win the hearts of Sierra Leoneans youths. And before his last week tour of the Municipality, the flag-bearer aspirant was also given a rousing welcome in the Kissy Community in east end Freetown where he thrilled them with a masterpiece speech which was a real motivation that inspired most of them to pledge their support to him for the SLPP flag-bearership.

Though many critics have vehemently opposed Alhaji Dr. Kandeh Yumkella for just coming from the blues to aspire for the SLPP flag-bearership, his door-to-door campaign in Freetown has started paying off and if he continues with such move, there will come a time when he will gain more national recognition than those labelling him as stranger to Sierra Leone politics.

I believe it is not how long you have served the SLPP that would qualify you as a flag-bearer aspirant; instead, it is the added value you can bring to the party to attract more national appeal that actually matters to the SLPP if at all they are interested in forming the next government. For instance, Alhaji Dr. Kandeh Yumkella may not have served the SLPP for long as compared to other flag-bearer aspirants like Messrs. Andrew Keili, John Oponjo Benjamin, Julius Maada Bio, Munda Rogers, Franklyn Rogers and many others, but come to look at their personalities and their contributions to both national and international development, any right-thinking Sierra Leonean will easily fall for Alhaji Dr. Kandeh Yumkella, whose exemplary performance in the international community has won the hearts of world leaders like Barrack Hussein Obama, David Cameron and the Chinese President. Sometimes I ask myself that if it took some time for President Ernest Bai Koroma to be recognized by the international community, what is wrong with making someone a presidential candidate whose footprint is within the corridors of the international community. Is the SLPP throwing away their blessing by denying the global advocate for someone whose movement is limited in the world? Perhaps the SLPP will not hesitate to do just that, but they should realize that majority of Sierra Leoneans will never entertain a President that has been repeatedly refused a visa by the American Embassy in Sierra Leone because of alleged gender-based violence against his former spouse in the USA.

On the contrary, Alhaji Dr. Kandeh Yumkella had already sold himself to the international world before he could express interest in contesting for the SLPP flag-bearership. He has the international credibility and the diplomatic clout for world leaders to listen to him with kin interest whenever he speaks on the world energy project which he designed ten years ago in the UN. The flag-bearer aspirant also facilitated many development projects in the energy sector for Sierra Leone when he was Director General of the United Nations Industrial Development Organization (UNIDO), such as the Gbangasoka mini-hydro project which he three weeks in Bo that it is now 90% complete, the Moyamba Mini-hydro project, the industrial growth centres in Bo, Makeni and Kpandebu Dama in the Kenema District, the Barefoot Women’s Solar Project, you name it.

I believe if Alhaji Dr. Kandeh Yumkella is given the opportunity by the SLPP to showcase his contributions to development at both national and international levels, I am absolutely certain that any well-meaning Sierra Leoneans would choose him over tribal and regional politics because he has got the potential of being a development oriented, upright and influential President with enough international space to capitalize on for the development of Mama Salone.

So let the flag-bearer continue with his meet-the-people campaign from Freetown to Koindu and from Kabala to Sulima and with time, patriotic Sierra Leoneans will start realizing that he is the hope of this country and things will start turning in his favour.

“No Third Term Agenda for Presiden...