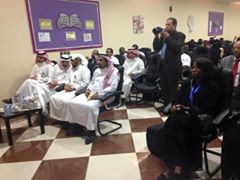 The professional performance of Sierra Leonean workers in the Kingdom of Saudi Arabia, irrespective of their work places, is becoming more salient and more glaring day by day. Sierra Leoneans are effectively rebranding their country in Saudi Arabia in their own way and manner fighting to be deservedly reckoned and recognized as the sons of a country that had the pride to be once dubbed ‘The Athens of Africa’.  (Photo: Attendees of the Accreditation Ceremony)

Thursday, 5th November, 2015, was a remarkable day for Sierra Leoneans residing in Riyadh, the capital of Saudi Arabia. Five Sierra Leonean teachers at MANHAL SCHOOL for BOYS, a prominent school in Riyadh, were singled out among many other nationalities to be honoured by the School authorities for their outstanding performance and effective contributions to the improvement of the school standard.

MANHAL SCHOOL for BOYS is offering an American Diploma course that needed to be accredited by the original offering institution in the United States of America. It had invited international educational accreditors to assess and evaluate the performance of their teachers and the method of delivery of the course materials on a number of occasions in order to be recognized as one of the learning centres accredited to offer the American Diploma course in the Kingdom. However, all attempts and efforts to clinch their most coveted accreditation for the diploma  in the past three years were doomed to failure until the start of the this academic year, 2015-2016, when four Sierra Leonean professional teachers ( plus another one already on the ground) joined the school.

From the onset, the presence of the sierra Leonean teachers categorically signaled that the school was heading for big events. In a short period of time, they introduced their own methods and teaching techniques which match the modern methodology, especially in the fields of teaching Mathematics, English Language, Science and Social Studies. Soon they became the talk of the school.

Now the time of reckoning for the Sierra Leonean teachers came recently when members of Accreditation Team from the U.K. and U.S. visited MANHAL SCHOOL for BOYS to evaluate the school and the performance of its teachers in order to determine whether it has met the laid down criteria for accreditation this time around. The Western accreditors were in for a nice surprise when they saw the high professional standards displayed by the Sierra Leonean teachers. They were so amazed and impressed that they had no option but to recommend a five-year accreditation to MANHAL SCHOOL for BOYS, which would enable the school to deservedly offer the American Diploma Course.

Upon having a long term dream come true, the Director General of MANHAL SCHOOL for BOYS did not only issue letters of appreciation to the Sierra Leonean teachers, but he also ordered to invite them to dinner in a high class restaurant in the centre of Riyadh. There, along with a few notable Sierra Leoneans, the teachers were served a big meal with a variety of palatable dishes. Nonetheless, beside the delicious food, what was most appreciated by the Sierra Leonean teachers was the honour given to them coupled with the recognition and appreciation of their contribution to improving the school programmes.

The honoured Sierra Leonean teachers are as follows: Messers: Abdul Aziz Kargbo, Alpha Bangura, Mohamed Bangura, Sheikh Gibril Sesay and Yusuf Turay. The above gentlemen are the heroes who have recently rebranded Sierra Leone in Saudi Arabia. And before them, other Sierra Leoneans had done similar rebranding. So, the trend to bigger rates of rebranding Sierra Leone continues unabated. The writer of this article has learned from some unconfirmed sources that Sierra Leoneans working in the educational sector have been recognized by the Saudi Ministry of Education as competent and professional. Now with the recent breakthrough at MANHAL SCHOOL for BOYS, no one can imagine the extent of the echo to which the name of Sierra Leone will sky up. However, one definite thing is that Sierra Leoneans taking part in the Saudi workforce have proven their worth and mettles thereby colourfully rebranding the land that they love, Sierra Leone.

16 Communities to battle for Moser...