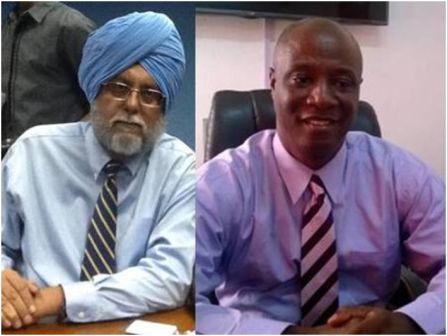 The World Bank Country Manager in Sierra Leone after just spending over a month since he took up office has sounded his impression with the way the leadership of the National Telecommunications Commission is operating. Parminder P.S. Brar, informed journalists on Friday that the World Bank has confidence in the leadership of NATCOM. With Momoh Konte as Chairman of NATCOM, the Word Bank Country Manager said the bank is willing to provide more support so that NATCOM will be strengthen in its regulatory functions. “We depend on NATCOM to regulate cybercrime in Sierra Leone,” he said, and added that the liberalization of the international gateway has shown the level of commitment the government of Sierra Leone has in improving on the communication sector. (Photo: l-r Country Manager, Parminder P.S. Brar and Momoh Konte of NATCOM)

The liberalization of the country’s gateway is one of the conditions set by the World Bank for Sierra Leone’s participation in the consortium of 23 countries that would connect to Europe via the ACE (Africa Coast to Europe) 17,000-kilometer fiber cable between France and South Africa.

It can be recalled that, the since Momoh Konte was appointed as Chairman of NATCOM he has enjoyed the support of President Dr. Ernest Bai Koroma to provide a sound leadership, which has amazed donors like the World Bank.

The Government of Sierra Leone through the National Telecommunications Commission (NATCOM), reached a resolution to liberalize the telecommunications international gateway. On Friday 6th March, 2015, the Deputy Minister of Justice, Arrow Buckarie tabled before the Well of Parliament a Bill called the Telecoms Amended Act 2015. The much awaited bill was given a warm embrace by Members of Parliament irrespective of their political affiliation. The approval of the Telecoms Amended Act 2015 saw Section (33) of the 2006 Telecommunications Act (as amended), repealed and replaced.

The new World Bank Country Manager has praised the Government of Sierra Leone for what he described as its “hard move” in the fight against the Ebola virus disease (EVD).

Mr. Parminder P.S. Brar registered the Bank’s appreciation during a courtesy call on President Ernest Bai Koroma at State House Freetown, where he categorically extolled the country for doing extremely well in the fight against the epidemic. He said Sierra Leone is not in any way under pressure to bring in companies to invest in the sector. He assured that the Bank will work with the leadership of the country and NATCOM to ensure that the communication sector receives a facelift.

Sierra Leone has over the years enjoyed a very good relationship with the World Bank.

Mr. P.S. Brar assured that he will strengthen Sierra Leone’s partnership with the Bank, and continue to work closely with government’s post-Ebola Recovery team on delivering the World Bank programmes that are supporting the government.

Agriculture is the baseline for th...