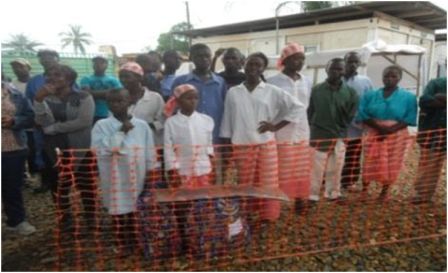 Ebola transmission in Sierra Leone is over. Nation enters 90-day enhanced surveillance period On 7 November 2015, as no new case of Ebola virus disease has been recorded. Sierra Leone has met the criteria set by the World Health Organization (WHO) for declaring the end of Ebola transmission.  Sierra Leone met that milestone, on that day, the WHO has declared the end of Ebola transmission in Sierra Leone, at an event organised by the Government of Sierra Leone through the National Ebola Response Centre (NERC) on November 7, 2015.  The declaration took place at a formal ceremony at the Bintumani Conference Centre, Bintumani Hotel Ground in Aberdeen in western Freetown and it was attended by His Excellency the President of Sierra Leone Dr. Ernest Bai Koroma, key government officials, local government and traditional authorities, religious leaders, heads of political parties, members of the international community, healthcare and Ebola response workers and non-governmental organizations, the press and representatives of civil society.

Dr Sheikh Omar Khan was the first and only viral physician in the country who was in charge of the laser fever hospital in Kenema, eastern Sierra Leone. Sadly he was the first doctor to die of the virus on the very day the president arrived in Kenema by helicopter to see him on his sick bed in the same hospital. Prior to his demise he had this to say to the nation through the BBC reporter that: “one of the reasons why the virus is spreading quickly is the denial factor  by the people and that they must stop such habit and begin to see that Ebola is real and it kills”, Dr.  Khan Warns.

When he was asked in that same interview about the dangers posed by the EVD to him he said: “I fear for my life”.

His death was a shock to the entire nation and immediately after that president Ernest Bai Koroma declared the health state of emergency.

The Spanish foreign missionary doctor that was in charge of the Mabessewneh Catholic Hospital in Lunsar, northern Sierra Leone, some 50 miles from the capital, who died later in Spain, was infected by his house made whom he nursed of an illness proved to be Ebola later on. Before he reluctantly agreed to be flown to his home made this comment: “ if I die it is because of two things; one because I love my job and two my made lied to me about his status in the beginning”.

According to his colleagues in the hospital when the made began to feel weak his boss asked him whether he had touched a dead or sick person before that he said: “NO”! Which means he could not have touched him if would have said; YES!

Mr. Yusuf Kabbah is the president of the Ebola Survivors Association (ESA) on November 7, together with colleagues visited the two cemeteries that were allocated by government to all Ebola burials in Freetown, the Capital. He said: “it is not easy to be infected and survive by the Ebola virus we were lucky to survive and that is why we are here in the cemetery to remember them in prayers on this very day we are celebrating the end of the virus”. For us it is not even a celebration but reflection and commemoration”, he added.

Dr  Abu Bakar Fofana (Medical Doctor) is the minister of Health and Sanitation while thanking all stakeholders for a job well done on November 7 at Bintumani Hotel  also reminded them of the challenges of post Ebola era he says: “ survivors must not have sex with anybody till after  90 days and must not have sex without using condom”.

According Mohamed S.K. Sesay (health worker survivor):  “The bulk of survivors are suffering from complications like headache, cold and fever but nobody cares for them. They also cry of hunger sometimes”.

Internal Auditors are key in the f...