Internal Auditors are key in the fight against corruption -ACC Commissioner 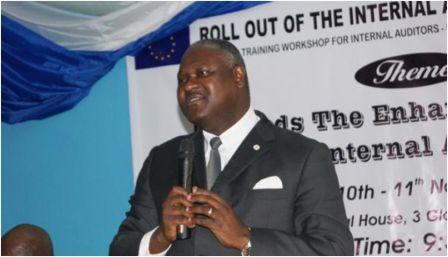 Internal Auditors are key in the fight against corruption -ACC Commissioner

The Commissioner of the Anti-Corruption Commission (ACC) has described internal auditors as key stakeholders in the fight against corruption. Joseph Fitzgerald Kamara made this statement at the opening session of a two-day workshop for internal auditors of government ministries, departments and agencies (MDAs) at the Cathedral Hall in Freetown. The workshop for the roll out of the internal audit function within MDAs is supported by the European Union and has as its theme ‘Towards the enhancement of an effective internal audit function’. Mr. Kamara said the office of the internal auditor must be independent and also requires a high level of integrity. Internal Auditors, he said serve as gatekeepers to ensure accountability and effective internal control measures are implemented and exercised. He however expressed his disgust that some internal auditors who sometime engage in dishonest acts which often result in a loss to their institutions and the country as a whole. He therefore expressed hope that the training would help improve the level of performance and integrity within MDAs.

Earlier, the Chairman of the programme who also doubles as Chairman of the Public Service Commission, Dr Max Sesay, described the training as consistent with the Government’s public sector reform programme which has a capacity building component for public sector workers. He therefore urged the auditors to take the training very seriously and put into practice the knowledge acquired.

Director of the Systems and Processes Review Department, ACC, Maurice Williams, made a brief statement on the need for the training, as been to ensure judicious use of government resources, as well as institute the values of accountability, effectiveness and efficiency in MDAs.

The Deputy Auditor General, Audit Service Sierra Leone, Tamba Momoh, described internal auditing as a practice meant to add value to an organisation as well as improve internal control measures. Such practices should be able to make MDAs succeed, he noted.