Homepages
Your trusted place for Sierra Leone and global news
Trending News
HomeFeaturedLiving with the Dead, Friends of the Dead hopeful of returning to business as Ebola ends in Sierra Leone

Living with the Dead, Friends of the Dead hopeful of returning to business as Ebola ends in Sierra Leone 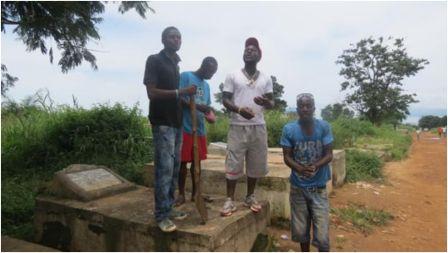 Living with the Dead, Friends of the Dead hopeful of returning to business as Ebola ends in Sierra Leone

For over one year Ebola reversed Sierra Leone’s economic gains and affected the livelihood of most young people like Friends of the Dead who derive their livelihoods from their work at the Ascension Town Cemetery in Freetown.

Victor Rogers, Acting Chairman of Friends of the Dead explained that they have been totally out of job since 2014 when a ban was put on burial at the Ascension Town Cemetery and others across the country due to the Ebola outbreak.

“Our work here is digging graves, cleaning them, making tablets and vaults as well as helping some families with burial but were put of business for the past year,” said Rogers.

He went further to state that life has been difficult for them and their families but express the hope them of getting back to business as Ebola goes down in the country.

“We are parents; we have families and want better lives than sitting waiting for someone to die before we get a job through their funerals. One of the members of the Friends of the Dead lamented that ”I am a trained and qualified driver but there is no job so am living with the dead,” said Tamba Langama.

Langama further said that he has spent over ten years at the Ascension Town Cemetery where he has learnt masonry and building graves to get his living and feed his family. ”At least at the end of the day, before the Ebola outbreak, I will make 20,000 Leones (around 5 United States Dollars) to take home”, he explained.

The Friends of the Dead appealed for more support with equipments and protective gears from the government and other organizations so as to be able to do their work safely and effectively under the circumstances.

Victor Rogers said Friends of the Dead has been in existence for over twenty years mostly made up of young people who cannot find job. ”We are not criminals but friends of the dead, we clean the cemetery and help people to identify the graves of their relatives” he added.

“They are being used but we are trying to let them understand that they should not allow themselves to be used and abused with false promises,” he noted.

“Someone came here and hired us on behalf of a political aspirant to go dance for him. He gave us 200,000 Leones; we will not encourage them anymore,”Langama said.