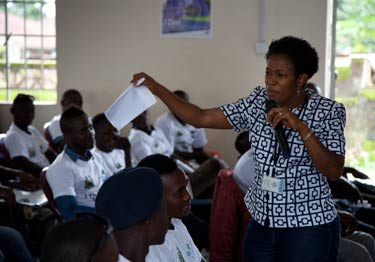 FREETOWN, 1 October 2015 – In Sierra Leone, one of the easiest and cheapest ways of getting from place to place is by hopping on the back of one of the Okada motorcycle taxis that ply the streets of towns and villages and the narrow rural tracks far from the paved roads. (Photo: UNICEF Field Support Officer Lois Kamara talks with Okada (motorbike taxi) drivers in Port Loko, Sierra Leone, about Ebola prevention measures and the role of Okada drivers, in an effort to reach zero Ebola cases)

But it’s rarely with a great sense of security. You don’t often get a helmet, and the driving can often leave much to be desired. Okadas are also an intimate form of transportation, and when the Ebola virus swept through the country in mid-2014, they became a potential source of transmission. In some cases, Okadas were used by sick people either heading to health facilities or escaping upcountry. It’s not uncommon to see several passengers squeezed behind the driver, increasing opportunities for the virus to spread through human contact.

Although new cases of Ebola are increasingly rare, the country continues to record infections, even as efforts to stamp out the disease carry on. Making sure everyone – including Okada drivers – remains vigilant is critical to ensuring Sierra Leone reaches the goal of eliminating Ebola transmission.

“We wanted to talk to Okada drivers, explain the dangers and make sure they are involved, so that if there are any sick people, and anybody comes to them to be transported quietly, they will call 117, the national Ebola hotline,” says Lois Kamara, UNICEF Field Support Officer working in Port Loko District, where a spike in Ebola cases in June led to a successful surge in the Ebola response dubbed Operation Northern Push.

“The workshop today was very good, because so far we have only been hearing about these things on the radio and newspapers, but we had never had a practical lesson like today,” says 22-year-old Alimamy Kamara, an Okada driver who participated in the workshop.

The event was organized by UNICEF in partnership with the Ministry of Social Welfare, Gender and Children’s Affairs, the Port Loko District Ebola Response Centre (DERC) and the Sierra Leone Red Cross Society.

Alimamy counts himself lucky to be alive today. “We had a tenant living in our house who was pregnant and she was taken to hospital to deliver, but she died while giving birth,” he says. “Her body was given to the family and they brought her home for burial. Then six days later, the results came saying she was positive for Ebola. Two weeks later, our younger sister fell sick. She was also taken to the hospital, as Ebola treatment centres had not been set up yet. She too died.  Then my brother also got sick, and he too died.”

Miraculously, Alimamy, his mother and three other siblings did not catch the highly contagious virus, and today he is happy to be part of national efforts to rid Sierra Leone of Ebola.

“Having this practical engagement has enabled us to learn more about Ebola and what we should and should not do,” Alimamy says. “I have learnt that I should not be carrying any sick people. I should not allow people to do secret burials. And I should call 117 for any suspected case.”

UNICEF used the opportunity with Okada drivers, almost all of them young men, to tackle the issue of teenage pregnancy, safer sex practices and parenthood.

“I attended a community meeting recently where most of the parents and stakeholders were complaining that Okada riders were responsible for girls dropping out of school,” says UNICEF’s Lois Kamara. “So, when I talked to the Okada drivers, I explained about protecting themselves, prevention of Ebola, and other sexually transmitted diseases. I spoke to them about taking care of their families and not just for their bikes. Because in the morning, they will wash their bikes, they will add fuel, but their children will remain hungry at home. We all agreed that their bikes will not last forever, and that there is more value in caring for their children. So those who have children promised to make sure their children are clean and fed before heading out to work.”

“I really enjoyed the discussions on child protection,” says Alimany. “Before, I was just leaving my child at home with my mother in the morning without checking on him. Today I have learned that before I leave home I should be taking care of my son, making sure he is fed and clean. He will be the one following me at home, and when I get old, he will be the one who will take care of me.”

When the workshop ended, the whole town got to know about the event – Okada drivers formed a motorcade to drive through Port Loko town, publicly announcing their commitment to be part of efforts to achieve and remain at zero Ebola status.

“I think it was good that we included Okada drivers, because they are always complaining that they are left out,” Lois says. “Most times they are the ones transporting sick people to the secret hideouts of herbalists. So from here on they will be able to report, to call 117, and know that it is their responsibility to help in remaining at zero.”

By Indrias Kassaye, courtesy of UNICEF

When Madina’s Services Get Interna...