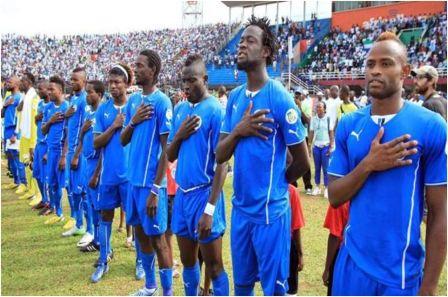 Report from the headquarters of the Sierra Leone Football Association(SLFA), has it that Leone Stars caretaker coach Sellas Teteh has invited 8 overseas-based professionals for next month’s 2017 Africa Cup of Nations qualifier against Ivory Coast in Lagos Nigeria.

Six regular national team players has been axed from the list which include Alfred Zagalo Sankoh, Hassan Sesay, John Kamara, sheriff Suma, Ibrahim Kallay, Michael Lahoud who are regular players for their respective clubs and the national team Leone Stars.

According to Sellas Teteh during his unveiling ceremony he promised Sierra Leonean s that only regular foreign base and consistent home base player will be called to the national team but it look a bit differ according to the list he presented.

The Ghanaian, who won the 2009 U-20 World Cup with Ghana, will have a daunting task to get Leone Stars back on the 2017 Nations Cup campaign after they lost their opening match in the qualifier 1-0 to Group I opponents Sudan in June, when the suspended SLFA technical director John Jebbor Sherrington was caretaker coach.

However Nykopping Striker Alhaji Kamara looks doubtful as he is currently nursing a muscle injury he is now a major doubt for the game after he suffered a muscle injury in his club last game.

According to the Technical Director John Jebbor Sherrington “For us we will make sure that we are very much prepared as a team; I don’t expect the game to be too different than the one we played against them the last time.

They had a lot of good movement and I expect them to have a lot of better movements for us we know we will be out to play 100% at every single position.

“We have got two weeks of training with the home base and unattached players we hope to see the foreign base players jetting into Nigeria by early next week so if we train as a team will be well prepared for the game but then it’s down to them on the match day to play to their maximum.

“And if they do, we can cause Ivory Coast a big upset adding that is going to take a big performance from every single player on the day Sherrington added.

A Society That Places Loyalty Over...