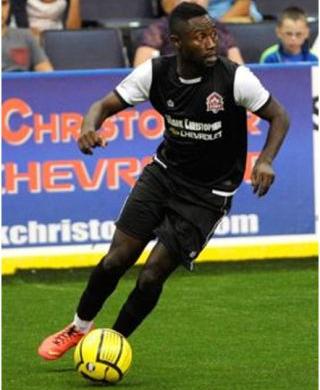 Sierra Leonean USA base Midfielder Israel Sesay feels his fitness level is fast improving after playing his second match for Las Vegas Ledgend in the the Professional soccer League on Saturday after a month on the sideline.

Sesay lasted 70 minutes on the pitch as his side came from behind twice to win 3-2 at home against Maryland FC.

The 24-year-old is yet to play for his country of birth at any stage and has not given hope for a call up.

But the former LA Galaxy player is happy with his current output on the pitch.

“Yeah I’m getting better, I think my fitness level is coming up, so I’m just hoping I’ll get to 100%,” he told the club’s website.

“I always listen to the coach because that is my style of play. It’s been great so far, so far so good, it’s been great and Iam enjoying myself

Sesay emigrated from his native Sierra Leone with his family at the age of 11, settling in Gaithersburg, Maryland.[ He attended Quince Orchard High School, where he starred as a forward and helped lead his school to the Regional Quarterfinals in 2005. He also played for local club team Potomac Cougars and Bethesda Arsenal, before joining U.S. Soccer’s Residency Program in August 2006.

Sesay came to Los Angeles Galaxy as part of a weighted lottery in August 2007, and made his MLS debut on September 13, 2007, coming on as a substitute for Kyle Martino against Chivas USA; in doing so, Sesay became the youngest player in Los Angeles history to appear in a game, at the age of 17 years and 9 days, breaking the former record held by Guillermo Gonzalez, who was 17 years and 168 days when he made his debut in June 2003

With the MLS Reserve Division having been scrapped at the end of 2008, Los Angeles loaned Sesay to the Hollywood United Hitmen of the USL Premier Development League and the Cleveland City Stars of the USL First Division for part of the 2009 season, to maintain his match fitness levels He scored two goals on his Hollywood debut on May 16, 2009, against Bakersfield Brigade

Sesay signed with the Real Maryland Monarchs of the USL Second Division on April 26, 2010 However, Sesay was still considered to be a part of Los Angeles per the MLS Players Union Player Salaries as of June 14, 2010

In October 2013, Sesay signed with the Ontario Fury of the Professional Arena Soccer League.[ In January 2014, he was traded to the Las Vegas Legends.

Sesay played in 14 games with the U.S. national Under-17 team between 2006 and 2008, making ten starts and collecting three assists.

UNICEF story: No room for complace...