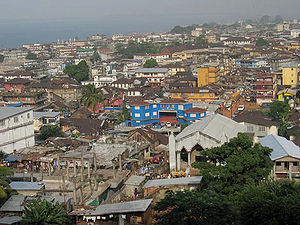 Many citizens of Sierra Leone are in dire need of shelter as evident in the fact the many sleep on the streets and in the markets where they are exposed to the merciless African weather conditions.

The situation is worse in the country’s capital city, Freetown, where people spend ages looking for house to rent at cut-throat cost. In Freetown, it is more difficult to secure a dwelling house than to secure a job.

Worsening the situation is the fact that some wicked landlords capitalize on the situation to let their house for thousands of US Dollars which the average citizen cannot easily afford. The sad situation has been a major factor for the proliferation of slums.

In the consequent mad rush to build houses by the few who can afford it, dealers in building materials have skyrocketed prices with a bag of cement now going for over Le40,000 and a bundle of zinc sold for over Le200,000.

The acute shortage of housing has transformed some the few fortunate house owners into overnight millionaires and they are often deified by the poor tenants who would not want to be evicted for fear of spending years to look for another accommodation.

Our courts are overflowing with cases between tenants and landlords and most of the cases involve landlords dragging to court tenants who refuse to leave their house after expiration of notification period.

The most unfortunate part of it is that successive governments have not been paying due attention to the problem. In fact what the former Tejan Kabba-led Sierra Leone Peoples Party, SLPP Government did was to worsen the situation by selling the few low cost houses we had.

The ruling Ernest-Koroma led All Peoples Congress, APC government is yet to embark on a massive low cost housing scheme which is one way to alleviate the chronic problem of housing in the country. We believe it is extremely disgraceful for any government to allow its citizens to be sleeping on the streets. Shelter is one of the basic necessities of life to which every citizen is entitled.

Therefore, this press is calling on the Sierra Leone Government to consider building several low cost houses to alleviate the housing problem of the people.

Shandong has no plan to terminate...