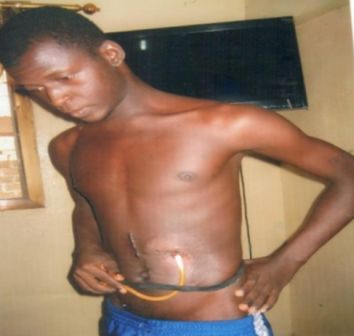 A dying victim of Freetown City Council Metropolitan Police brutality, Abdul Sillah, who has been in a critical medical condition after being manhandled in 2013, is reported to have started attracting pity only now from well-meaning sympathizing citizens, one being the Honorable Member of Parliament representing Constituency 104, Babatunde Lewally, who recently donated $100 to the victim to facilitate his travelling abroad for medical treatment.

According to the victim, he was brutalized by the Freetown City Council (FCC) police for allegedly depositing garbage on Kissy Road in the east end of Freetown.

Kawaja Newland is the Financial Secretary of People United to Save Humanity (PUSH), a humanitarian organization that has been championing the case of the victim. He told Sierra Express Media that his organization wholeheartedly appreciated the kind gesture of Hon. Lewally, describing it as worth emulating. He noted that they have used MP Lewally’s donation to secure a passport for the victim but that there is still need for more financial assistance to fly the victim abroad.

According to Kawaja Newland, since Abdul Sillah was brutalized by FCC Metropolitan Police, purportedly on the instructions of FCC Mayor, Franklyn Bode Gibson, PUSH has been facing serious financial constraints in sustaining the victim’s depreciating health.

Mr. Newland disclosed that after tireless efforts exerted by PUSH, they succeeded in prevailing on a Makeni-based humanitarian medical organization, Africa Surgery, to perform a surgical operation on the victim.

Sierra Leone gets its first Three-...

C4C Alarmed At Escalating Divisiveness I...