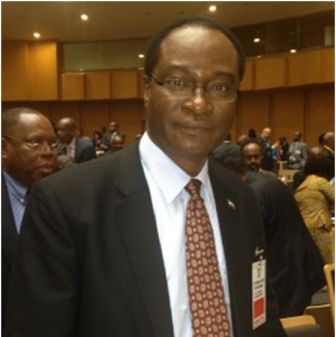 As the date draws closer for the election of what I believe, Dr. Samura Kamara, our erudite Foreign Affairs Chief, as President of the African Development Bank, , I am publishing again an article I did two months ago on him, on reason for his election into that job. Read on:

Africa’s premier Bank – the African Development Bank, will soon be appointing a new president and the race is on for the best and the most astute to take over the huge governance responsibility that comes with the job.

Sierra Leone’s foreign minister and former finance minister – Samura Kamara is pinning his colour on to the mast, and is looking ever increasingly the best candidate.

Africa’s development has come a long way, especially socio-economically and politically, and now rated as having some of the world’s fastest growing economies.

Much has also been achieved from the perspective of social development, as the quest for infrastructural growth has taken centre stage in most if not all nations in the continent.

At the political front, the holding of regular elections and ensuring smooth transition of power is loftily promoting Africa’s democratic credentials.

Ensuring these successes has seen the apparent and well positioned involvement of major multilateral development partners like the World Bank, International Monetary Fund, amongst others. For example, the Forum On China-Africa Cooperation (FOCAC) is playing a lead role in driving development cooperation between the two-China and Africa.

That said, and within the reach of the African Continent, a multilateral development finance institution like the African Development Bank (AfDB) cannot be ignored, when it comes to promoting Africa’s growth.

The Rwandan born Dr Donald Kaberuka has effectively and ably managed the affairs of the Bank for ten years as president. Whatever success stories that shall be discussed regarding the Bank shall surely be in line with the leadership he has so profoundly provided.

And by May this year, his term as president shall come to an end, after overseeing the affairs of the Bank for two consecutive terms, five years of each term.

And as would be expected, on 20th February, the Steering Committee of the Bank’s Board of Governors, officially announced the names of candidates, for the job of president, and in alphabetical order, they are: Akinwumi A. Adesina– Nigeria ; Sufian Ahmed -Ethiopia; Jaloul Ayed-Tunisia; Kordjé Bedoumra -Chad; Cristina Duarte -Cabo Verde ; SAMURA M. W. KAMARA– SIERRA LEONE ; Thomas Z. Sakala-Zimbabwe; and Birama Boubacar Sidibe -Mali.

My interest here is the candidature of Sierra Leone, through her erudite and articulate Foreign Affairs and International Cooperation Minister, Dr. Samura Matthew Wilson Kamara.

Sierra Leone is a good example when it comes to issues of development and especially post war reconstruction and economic growth. Our economic turnaround, through the roadmaps of ‘Change’ and ‘Prosperity’ should better serve as reference point for development within the Continent. Dr Samura Wilson Matthew Kamara is a lead player in his country’s drive to economic growth and post war development efforts with his background in finance and development cooperation for decades.

Sierra Leone, prior to the outbreak of the Ebola Virus Disease in the three (Guinea, Liberia Sierra Leone) of four (first three plus Ivory Coast) Mano River Union countries, was moving towards a resounding economic standing. Her economy was amongst the fastest growing ones in the continent with lots of economic reforms.

Development and economic stability cannot be achieved without peace and security. At the international scene, Sierra Leone is also a leading player in peace keeping. From Darfur, Sudan, to Somalia, Sierra Leone has helped ensure stability in those parts of the continent.

Dr Samura Kamara, the country’s current foreign chief and who, throughout his years in public life has been a development economist, is a man with “strong foundation in diplomacy, macroeconomic, public finance, central banking and financial sector policy analyses and reforms”.

With his wealth of experience in development cooperation and finance, he served Sierra Leone as Finance Minister, prior to his appointment as Minister of Foreign Affairs and International Cooperation. He also was Governor-Bank of Sierra Leone; and Financial Secretary -Ministry of Finance and Economic Development.

Given Samura’s years of experience in International Economic Cooperation, and Partnership Agreements with bilateral and multilateral development agencies, he has successfully positioned his country’s international profile for years to come. And as Finance and Foreign Minister, he succeeded in lifted the bars of cooperation ties between his country and her development partners and friendly nations.

Africa today needs someone with vast experience in economic development and one that can open doors of international cooperation, especially with Africa’s multilateral agencies and friendly nations.

Dr. Samura Kamara has got all that is required. The Board of Governors of the African Development Bank (AfDB) should with prudent attention look at the chances of having Dr Samura Kamara as president for the Bank.

Children in armed conflict in Afri...