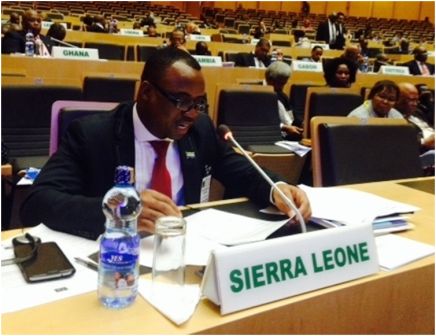 Sierra Leone’s Permanent Representative to the African Union and Ambassador Extraordinary and Plenipotentiary to the Federal Democratic Republic of Ethiopia, His Excellency  Osman Keh Kamara , has made strong recommendations about solving the perennial problem of children in armed conflict in Africa .

The ambassador stressed the  need to strengthen national capacities, bolster existing child protection regulations and share best practices on emergency response preparedness in order to prevent, protect or alleviate the impacts of  threats to vulnerable groups like children and girls.

Ambassador Keh Kamara made these strong recommendations while delivering a statement at the  African Union Peace and Security Council Open Debate on Children and Armed Conflict in Africa, at the AU Headquarters in Addis Ababa, Ethiopia , yesterday.

My delegation congratulates the Republic of Uganda as Acting Chair of the African Union Peace and Security Council for the Month of May. We commend the council and the African Union Committee of Experts on the Rights and Welfare of the Child (ACERWC), the UN and its specialized agencies for holding this open debate on children and armed conflict. It provides a brain-storming forum on the impacts armed conflicts have on children in Africa. The debate equally provides member States with the opportunity to openly reaffirm their commitments to the protection of children in situations of armed conflicts and to provide recommendations to the Peace and Security Council for concrete and result-oriented actions.

Sierra Leone reaffirms her support for the work of the African Union Peace and Security Council to ensure the protection of children from violations committed against them in armed conflicts. In this vein, we welcome the various decisions of the Peace and Security Council on children and armed conflict, and reiterate the need for the frequency of these decisions in order to enhance existing measures adopted by Council and the African Union as a whole to protect children affected by conflicts and hold perpetrators accountable. It is now a judicial precedent established by the Special Court for Sierra Leone (SCSL) and reaffirmed by other international criminal courts and tribunals that conscription of children as soldiers or combatants is a crime against humanity that warrants punitive sanctions.

Mr. Chairperson, My delegation reiterates its call for the Peace and Security Council to initiate discussions on how to hold perpetrators of grave violations against children accountable. The spate of violent conflicts in the African continent with debilitating impacts on children underscores difficulties on holding perpetrators accountable. In this respect, my delegation encourages member states to strengthen national accountability mechanisms and judicial capacities by enacting robust child protection legislations that proscribe horrendous acts perpetrated against children. Where it can be established beyond reasonable doubt that  violations against children have occurred in a member state, and that member state manifestly lacks capacity or willfully refuses to hold perpetrators accountable, the Peace and Security Council should adopt decisions calling for the use of existing regional, continental or international accountability mechanisms to bring perpetrators to justice.

Conversely, the illegal transfer of arms and ammunitions into the hands of non-state actors is another serious phenomenon undermining the protection of children in Africa. In 2012, the United Nations General Assembly adopted the Arms Trade Treaty (ATT), the thrust of which regulates the ‘trade in small arms and light weapons’ as well as proscribes their transfer and/or supply into the hands of ‘illegal end users’. Therefore, the Peace and Security Council should adopt a decision calling for accountability mechanisms for the illegal supply or transfer of small arms, light weapons which naturally results to grave violations against children.

Mr. Chairperson, Evidence abound that armed groups mostly attack serene institutions where vulnerable groups like children invariably seek refuge during armed conflicts. Why should armed groups use schools, churches, hospitals and universities for military operations? Why should they target school children? Does abducting young girls a solution to internal political problems? One cannot imagine why armed groups use sexual violence against girls as a weapon of war. My delegation condemns, in strongest terms the use of these institutions and ensuing criminal methods as tactics of war; and implores the Peace and Security Council to adopt decisions calling on member states to enact legislations which prohibit the use of schools, churches, mosques, hospitals and universities for military operations.

Mr. Chairperson, Apart from the negative impacts of armed conflicts on children, children are in most cases victims of non-traditional security threats like natural disasters, famine and epidemics. The Ebola epidemic in the West African sub region is an excellent case in point. The affected countries did not only register high death rates among children, they also experienced high rates of orphans and teenage pregnancies. As indicated earlier, we need to strengthen national capacities, bolster existing child protection regulations and share best practices on emergency response preparedness in order to prevent, protect or alleviate the impacts of these threats to vulnerable groups like children and girls.

Thank you for your attention. 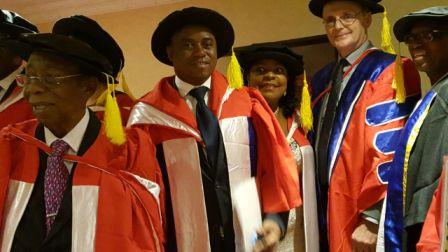