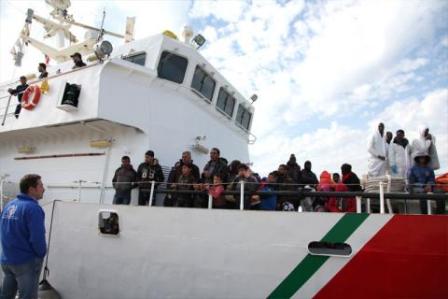 Italy – IOM’s team in Italy today (28/4) reports that its latest count of migrants arriving by sea this month stands now at 14,908 – a number that indicates that 2015’s human smuggling tide will be at least as large as last year’s – the deadliest on record for migrants lost at sea in the Mediterranean. Photo credit Francesco Malavolta/IOM 2015

IOM reported that for all of April, 2014, a total of 15,682 migrants sailing from Libya and Egypt arrived in Italy – a total that may be passed in the next three days. Through the first four months of 2014, Italy’s Ministry of the Interior reported 26,644 migrant arrivals. By 27 April this year IOM has counted 25,703. The organization expects this to surpass 2014’s year-to-date total in the coming days.

What is most striking between this year and last year is the rate of death, said Federico Soda, IOM’s Regional Director for the Mediterranean. This year some 1,780 deaths – including migrants in waters off Tunisia and Greece, as well as Libya – compared to last year’s total of 96 migrant deaths on the Mediterranean through the entire month of April.

“This month we have witnessed an unprecedented number of fatalities at sea,” says Soda. “Among the arrivals there are a growing number of sub-Saharan migrants. Some of them always had the goal of reaching Europe. Others decided to risk their lives to cross the Mediterranean after having lived for months or even years in Libya, a country that has become too dangerous, particularly for labour migrants from West Africa.”

Among the arrivals of recent days are passengers disembarking at the Italian port of Augusta last Saturday, when 334 migrants, rescued by the Italian Navy, were brought to shore. The main nationalities in that group were Somali, Malian and Nigerian and included 46 women and one 5-year-old accompanied minor from Somalia. On Monday, 27 April, the Italian Navy brought into the port of Taranto 267 men, women and children. The nationalities are as yet undetermined.

IOM Monday applauded the statement made by UN Secretary-General Ban Ki-Moon in Sicily aboard the Italian naval ship San Giusto. The Secretary-General called on all nations of the European Union (EU) to work to find political solutions for Libya and elsewhere in north Africa.

Soda also praised the EU for its actions in recent days. “We welcome the reinforcement of the Triton operation and we hope that the new mechanism that will be put in place in the Mediterranean will be able to rescue all the boats in distress. The distress calls received this year have all been made from over 100 miles from the Italian coasts, far outside the area patrolled by the Frontex operation. When a boat is in distress it can sink in just a matter of minutes,” he added.

IOM Tunisia reported that on Friday evening a boat in distress with 98 people on board was rescued by Tunisian fishermen. The migrants were brought to safety in the Port of Zarzis. Among them were three minors (1 Malian and 2 Senegalese) and migrants of the following nationalities: Mali: 42; Senegal: 29; Gambia: 14; Cote d’Ivoire: 2; Cameroon: 1; Nigeria: 6; Niger:1; Guinea Bissau: 2; Guinea Conakry: 1. This is the fifth boat rescued at sea by either Tunisian authorities or local fishermen since the beginning of March.