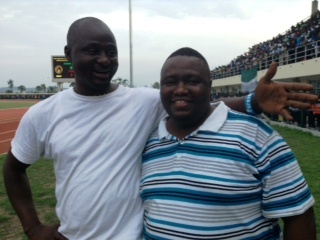 It has come to the notice of SWASAL Presidency Campaign Team that a certain group of persons are circulating false rumors that this team is receiving financial support from Madam Isha Johansen and other members of SLFA to facilitate our campaign.  (Photo: (r-l) Ibrahim Babatunde Sesay and his campaign manager, Adeyemi Paul)

In as much as the team does not intend to compromise its respect for all football stakeholders in the country, it will not allow rumor mongers to continue circulating false information aimed at denting the good image of its candidate.
The team hereby issues this press release to inform the general public, delegates, and members of SWASAL that it has NEVER, and does NOT intend to accept any such support from Madam Johansen or any football stakeholder in the country.
The SWASAL Presidency Campaign Team wants the public and SWASAL members to know that all finances used in Ibrahim Babatunde Sesay’s campaign are raised by family members, friends of Babatunde, and proceeds from his successful business operations, including his personally owned Satellite newspaper.
It is believed that the rumors are intended to distract the focus of Babatunde and his team from highlighting the failure of the past executive of SWASAL and of winning the coming elections.
The team hereby calls on all delegates and members of SWASAL to ignore the rumors and vote in Ibrahim Babatunde Sesay in the forthcoming elections for equal opportunity and progress of SWASAL.
Long live SWASAL,
Long live football,
Long live Sierra Leone.
Ibrahim Babatunde Sesay SWASAL Presidency Campaign Team
Stay with Sierra Express Media, for your trusted place in news!