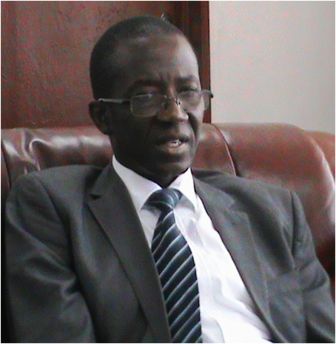 Speech delivered by the Hon. Minister of Health and Sanitation on the occasion of the symbolic launching of the Maternal and Child Health (Mami en Pikin Welbodi) week campaign April 24-27, 2015

I bring you greetings from His Excellency Dr. Ernest Bai Koroma, President of the Republic of Sierra Leone. It is a great pleasure and honour for me to take part in this symbolic official launch of another Maternal and Child Health Week Campaign (Mami en Pikin Welbodi Week) -the first for almost a year after the suspension of this activity due to the outbreak of the Ebola Virus Disease (EVD).  Photo: Health and Sanitation Minister, Dr. Abu Bakarr Fofanah

The Mami en Pikin Welbodi Week campaign is usually a bi-annual event and it is one of the strategies approved by the World Health Organization (WHO), supported by other child welfare organizations such as the United Nations Children’s Agency -UNICEF, for improving the health and nutritional status of children and women.

During this week more than 1.5m children under the age of five years are expected to receive a comprehensive package of low cost but high impact health and nutritional interventions. These interventions include: immunizations, vitamin A supplements, and deworming tablets which have all been proven to reduce under-five morbidity and mortality from common childhood illnesses such as diarrhea, pneumonia and measles.

The Mami en Pikin Welbodi Week is also an opportunity to raise the community awareness of the importance of key family care practices, as well as monitor the growth of children aged between 6-59 months.

As most of you would recall, this practice has become a tradition for us in Sierra Leone over the years. It has contributed in no small measure to the impressive gains that we have made as a nation in the area of child health pre-Ebola; such as the increase in immunization coverage, the reduction in the incidence of vaccine preventable diseases such as measles, mumps rubella, childhood tuberculosis, and childhood diarrheal diseases, as well as gains in reducing childhood malnutrition.

Due to the outbreak of the Ebola Virus Disease (EVD) the Ministry of Health and Sanitation has had cause to suspend this activity for almost a year now. The current thinking among health professionals is that the risk of another outbreak from vaccine preventable diseases currently outweighs the risk of contracting EVD. Evidence is also now leading to the conclusion that morbidity and mortality from non-Ebola illnesses outweighs that from Ebola. The vast majority of our children are dying from diseases that are either preventable or treatable with simple and low-cost interventions.

Evidence suggests that we could substantially reduce child morbidity and mortality by modifying our approach to health service delivery and adopt a more comprehensive approach to compliment the traditional facility based health care provision approach.

Maternal and Child Health Week, or Mami en Pikin Welbodi Weeks as we know them is one of the approaches that have been adopted as a way of increasing the coverage of these high impact, low cost health and nutrition interventions particularly in areas that are hard to reach and therefore underserved.

I want to take this opportunity to encourage all parents to cooperate fully with the health workers by bringing forward their children during this very important exercise so that they can receive the full benefit of the intervention.

I would like to take this opportunity to thank all our health development partners particularly the World Health Organization (WHO), DFID, GAVI, USAID, IRISH AID, HKI, UNICEF, UNFPA for all their efforts in supporting the Ministry of Health and Sanitation as we re-prioritize Maternal and Child Health Services.