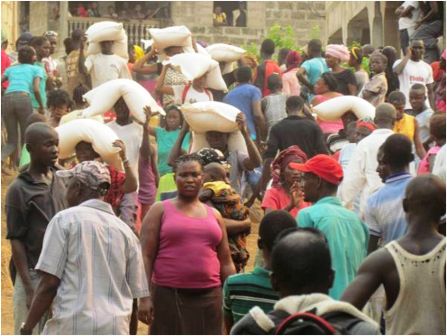 Welthungerhilfe (WHH) in collaboration with the World Food Programme (WFP) has successfully distributed rice and oil to thousands of vulnerable people affected by the three days lock down a campaign initiated for a zero ebola case in Sierra Leone.  (Photo: Beneficiaries of the WHH and WFP Food supply for the three days lock down)

The food supply targeted extremely vulnerable people in deprived communities within the Western Area that cannot afford a square meal a day.

Thousands of people among them youths, women and the aged gathered in various distribution centres at Kroobay slum, Susan’s Bay slum, Devil Hole, Deep Eye Water, John Top and other areas to collect their food supplement.

The food distribution team from WHH and WFP said the food supply is meant to cushion the impact of the three days lock down on vulnerable people who are too poor to have a food bank in their homes.

He said a 30 kilogram bag of rice and a gallon of oil was provided to four family heads to enable them prepare a meal for the three days.

He said thousands of people were registered for the supply and many more benefitted from it because it was blanket supply to vulnerable.

The food distribution was done according to the set standards so that people could not cluster together and hand washing buckets were also available at the centres with the Sierra Leone Police and Army providing security.

The Country Manager for World Food Programme (WFP) Guyn Myers said the food supply was provided by WFP and distributed by their NGO partners like WHH, Plan WADO, CIDO amongst others.

The supply he added was meant to provide food to vulnerable people affected by the three days lock down as many of the people could go out to eke a living.

Most vulnerable communities crowded the distribution centres for the food supply, however the food was not enough to feed all of them but majority of the people received the food supply in jubilation.

Team Leader for the Devil Hole food distribution from WHH Mafilla Kellie Marrah described the food distribution a success as many families could not have got food to eat during the three days lock down and also commended the police and the military for providing security.

He also said that registration of beneficiaries for the food supply was done in collaboration with community headmen, councillors and local authorities.

Beneficiaries of the supply expressed profound thanks and appreciation to the Government of Sierra Leone, WHH and WFP for providing them with food to eat during the lock down. Most people also appealed for continued food supply to the vulnerable groups.

Share With:
Tags
ebolaWelthungerhilfe (WHH) in collaboration with the World Food Programme (WFP) has successfully distributed rice and oil to thousands of vulnerable people affected by the three days lock down a campaign i
Previous Article

Statement by APC UK/Ireland on app...