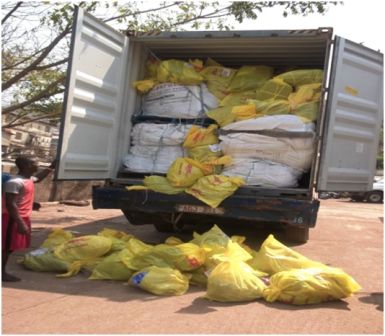 In a bid to help the Government of Sierra Leone (GoSL) to contain the dreaded Ebola virus, the Salone Ebola Action Group in Australia (SEAGA) donated surgical  and medical items worth more than Aus$220,000 to the Ministry of Health and Sanitation.  (Photo: The40ft Container at Medical Store)

The forty feet container was received by the Adviser to President on Political Affairs, Honourable Nurudeen Sankoh Yilla at the Sierra Leone Medical Store on Jomo Kenyatta Road in Freetown.

Presenting the item on behalf of SEAGA, Alusine Tholley said the medical items were put together by patriots of Sierra Leone who are currently residing in Australia. He said after mobilizing themselves to garner funds and support the health sector, they saw the need to collectively join the fight in eradicating the Ebola virus which has claimed the lives o more Sierra Leoneans. He disclosed that SEAGA is being headed by Sierra Leonean-Australian community leader, Ansumana Usman Koroma.

In his statement, the Hon. Nurudeen Y. Sankoh said, “as a Government, we are very impressed with such untiring support from Sierra Leoneans outside the country.” He went further to say that the donation is a manifestation of their love for their homeland. According to him, President Ernest Bai Koroma has severally called on all Sierra Leoneans to join him eradicate the Ebola virus, therefore “I am not surprised with such mammoth donation.”

Whilst officially handing over some of the donated items to Dr. Sheku Sesay-Donor Coordinator of NERC, Hon. Sankoh passionately appealed to SEAGA to continue their humanitarian gestures with or without the Ebola virus.

On his part, Dr. ShekuSesay revealed that crisis of this nature is not only meant for the Government, whilst calling on other Sierra Leoneans to be more supportive than before. He said very soon the Ebola war will be over as President Koroma is restless until he wins the battle against the virus.

Speaking exclusively to this medium from Australia, SEAGA Coordinator said, “We might be living outside our homeland Sierra Leone but we see the fight against Ebola as a civic duty of every Sierra Leonean no matter where you live.” He added that “We are all in this together.”

AccordingAnsumana Usman Koroma, SEAGA works collaboratively to attract attention to the urgency of the needs created by Ebola and mobilize the resources required for combating this noxious virus in Sierra Leone.  He maintained that SEAGA is developing various layers of actions with the priority being to create awareness and lobby the Australian government for their assistance in terms of finance, research and medical personnel.  He disclosed that another action about to be undertaken is raising the needed resources and transporting these resources to Sierra Leone to help combat the Ebola disease.

He affirmed that these efforts are beginning to yield results whilst SEAGA continue to lobby the Australian government, they have successfully secured and shipped a forty feet container of medical items that worth more than Aus$220,000 (two hundred and twenty thousand) to help in containing the virus. 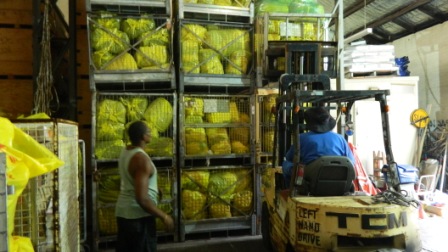 Fight against Ebola: Sierra Leoneans in...