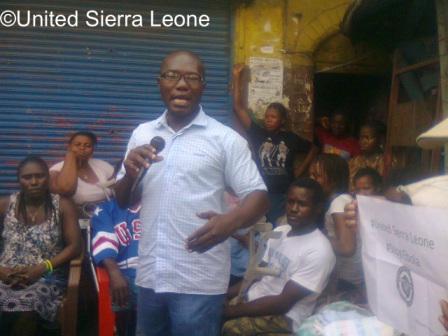 With support from The Messeh Leone Foundation and Pikin Bizness Charity, United Sierra has embarked on a nationwide ‘NeverAgainEbola’ Campaign and donations to Ebola orphans, survivors, and marginalised groups.

In Freetown, United Sierra Leone has donated food and non-food items to the Hastings Ebola Treatment Centre, Handicapped Youth development Association, and Milton Margai School for Blind. Donations included bags of rice, hygiene items, solar-c rank- torch- fm/am radio, mobile charge (siren all in one) and some money to help them pay for essential services.The donation of hygiene items highlights the importance of best hygiene practice to prevent and stop the transmission of Ebola. An education programme was also organised for the Kroobay Community.

Dr Adonis Abboud of Pikin Buziness/DStv, Mrs Agnes Fornah of The Messeh Leone Foundation, Miss Margaret Murray (Miss Sierra Leone), Rebecca Bockarie (artist) and United Sierra Leone campaigners were together with the Deputy Minister of Health and Sanitation, Hon. Madina Rahman at the Hastings Ebola Treatment Centre to promote the ‘ Never Again Ebola ‘ campaign and present donations to ebola survivors who were discharged from the Centre on Thursday, 22nd January 2015.

Dr Adonis Abboud, said: ‘’we are here today to create greater awareness of Ebola and the situation of vulnerable young people and the urgency to ensure ebola orphans, survivors, disabled and moralised groups are supported and cared for in this ebola crisis. We all have a responsibility to help and work with our local communities to prevent and stop Ebola. We must establish programmes for the economic empowerment and employment opportunities for youth in these deprived communities to work their way out of poverty and their families. ’’

Mrs Agnes Fornah, said: ‘’ we are here to help, as we believe that every child and young person should be accorded the opportunity to live a better life.  We must all explore ways in which the Government of Sierra Leone and international community can collectively contribute to overcoming this desperate and urgent needs of our people and put measures in place to ensure not only are the education and health systems better structured but these vulnerable groups have a role and voice in society’’.

The programme coordinator, Mohammed Jalloh (MAJ) called on Sierra Leoneans and international community to join the United Sierra Leone  ‘Never Again Ebola ‘ campaign to address both current and post ebola crisis. ‘’We are campaigning to say #NeverAgainEbola. We are seeking support for marginalised groups who have been greatly affected by Ebola’’, said Mohammed.

‘’We were hopeless and helpless. We had no idea about what to do and when Ebola is going to end. The United Sierra Leone is giving us hope and help to fight against ebola and believe that ebola will end soon. However, we are very worried about our education and the ever-increasing teenage pregnancies in our communities, we need a solution to this problem’’, said Agatha Ada Levi, United Sierra Leone campaigner.

The headmaster of the Milton Margai School for the Blind, Thaimu Dedimus Kargbo, the Coordinator of the Handicapped Youth Development Association, Mohamed Aicious Kamara, and coordinator for The Leaders Kroobay Community Project, Abdulai Jalloh echoed the call for government and international community support to marginalised communities and people affected by Ebola.

The United Sierra Leone ‘Never Again Ebola’ campaign in Freetown is being facilitated by:

Members of the Federation of Youth (FEPYOCAN) were also present helping with sensitization and donations.

United Sierra Leone ‘Never Again Ebola’ campaign was launched on 21st January 2015, following the end of its successful 60 Days Stop Ebola campaign. The campaign has inspired and engaged many people and organisations from across Sierra Leone and abroad, with thousands of campaigners and followers reaching out to millions of people across the world.  The United Sierra Leone has also released the video of the first ebola song done by Nurse Rebecca Bockarie and has created a new website to promote ‘Never Again Ebola ‘ campaign. www.unitedsierraleone.org.

The United nationwide ‘Never Again Ebola’ campaign and donations to ebola orphans, survivors, and marginalised groups is being replicated across country.