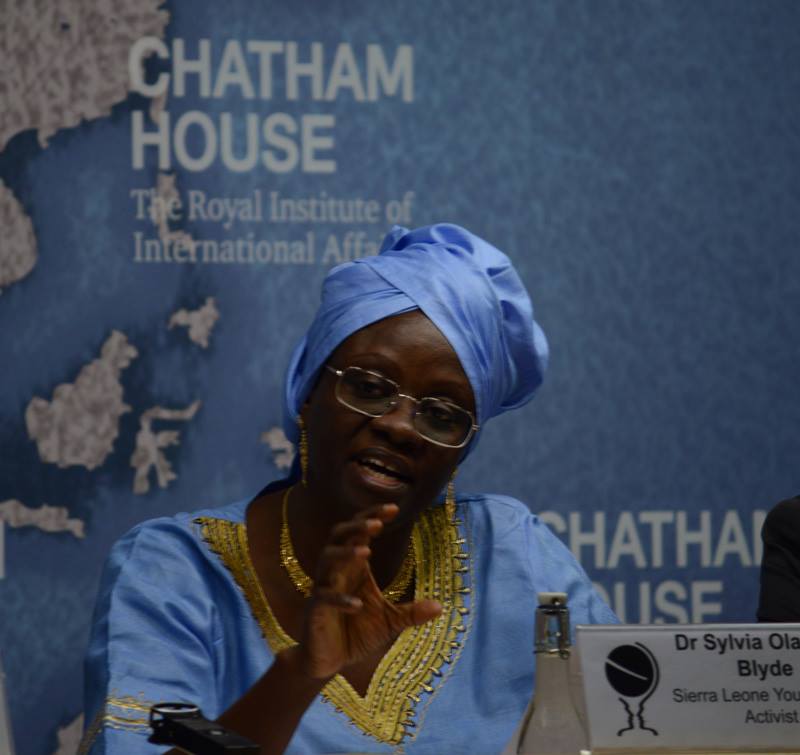 Former Special Executive Assistant to President Dr. Ernest Bai Koroma has called on Britain and the rest of the International community to rally behind the current Government in Sierra Leone after the Ebola crisis.

Dr. Sylvia Blyden, speaking as a Panelist at the Youth Conference sponsored by the Youth Division of the Commonwealth Secretariat at Chatham House – Royal Institute of International Affairs in London, believes Sierra Leone will rise again after Ebola.

“Sierra Leone will definitely rise again to continue from where it stopped before Ebola struck as the fastest growing economy in the world,” Blyden said while lauding the efforts of the President and his government in fighting the world’s deadliest disease.

She described the Ebola situation in Sierra Leone as ‘extraordinary’ and paid tribute to nurses and other health care workers particularly Pauline Cafferkey, the British nurse who was rushed out of Sierra Leone after contracting Ebola in Sierra Leone – and currently admitted at the Royal Free Hospital in London.

“We cannot sit by idly in Freetown or London and not be concerned about what happens in Kissi Teng in the Kailahun District. A lack of health care anywhere is a threat to healthcare everywhere,” Blyden said adding: “I submit today that ignoring the health care needs of poverty-ridden remote parts of Africa is what has led to merciless spread of Ebola and threatened powerful modern cities across the world. The UN’s Universal Declaration of Human Rights pays close attention to the Right to Education whilst the right to Health Care has been subsumed under right to good standard of living.”

Dr. Blyden made some positive remarks about her former boss – President Koroma, saying the Sierra Leonean leader has earned so many accolades and respect from the International Community for his style of governance and commended him for his commitment towards his social mobilisation campaign in a bid raise massive awareness to the local communities against Ebola.

She praised the British government’s contribution towards the fight against Ebola and paid special tribute to the British High Commissioner to Sierra Leone His Excellency Peter West, whom she said had been with the President throughout his Ebola social mobilisation drive upcountry in Sierra Leone.

“The British High Commissioner has stood by the President throughout his tour of upcountry and I want to thank him and the British government on behalf of the people of Sierra Leone,” the former SEA said.

Blyden, who represented Sierra Leone as an activist, also praised the leadership qualities of her former boss and described his Agenda for Prosperity programme as a ‘Perfect Blueprint’ for Sierra Leone that addressed pertinent areas for youth development in Sierra Leone.

She said President Koroma has appointed youths into strategic positions and that no other Sierra Leonean leader has demonstrated such commitment and empowerment of youths than the current President in the history of Sierra Leone.

“The empowerment of youths under the present leadership has been unprecedented in Sierra Leone,” she said.

She said the youths of today are different from the youths of yesterday, making reference to the findings of the Truth & Reconciliation Commission which clearly proved that youths then took to drugs and weapons because they foresaw no future in their lives.

“The Youths of today are champions of positive change in Sierra Leone because the present leadership has given them reason to believe that they have a bright future,” said Blyden.

Other speakers at the conference include Sierra Leone’s High Commissioner to the United Kingdom His Excellency Edward Mohamed Turay who presented an excellent piece of his government’s contribution towards youths in Sierra Leone, George Hodson of Britain’s Foreign and Commonwealth Office, Layne Robinson of Commonwealth Secretariat and Alex Vines of Chatham House, who chaired the programme.

The theme of the conference was “The Socio-economic Consequences of Ebola in Sierra Leone: Challenges and Prospects for Youth”

ACC and three others meet on Rokel...