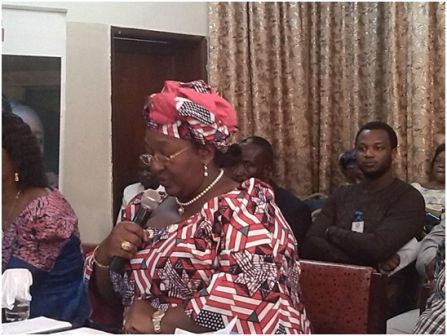 Office of the First Lady of the Republic of Sierra Leone has engaged Traditional and Cultural Establishments in Ebola response in Kenema, Bo and Makeni Cities. The Ebola Resistant Behaviour Change Initiative is an initiative of the First Lady, Mrs. Sia Nyama Koroma with funding from Plan Sierra Leone. Mrs. Koroma through this initiative is taking the fight against Ebola beyond a call for avoidance of body contacts. Through social mobilization and community engagement, her initiative seeks to develop Ebola Resistant Behaviour Change as a catalyst for ending the epidemic and prevent future re-occurrence.   (Photo: First Lady, Mrs. Sia Nyama Koroma delivering her keynote address )

Successful meetings held in the four Regions of the country saw the training of Traditional and Cultural Community Champions that would serve as ambassadors in contact tracing and ensuring that the chain of transmission is broken in all the districts of the country.

Addressing a successful meeting in Makeni City on Thursday, the First lady Mrs. Sia Nyama Koroma said the Ebola outbreak has created gaps in the educational, economic and social sectors in the country. She pointed out that it has increased unwanted pregnancies, drop out of schools, closure of so many businesses, and has affected the livelihood of the nation as a whole.

She noted that Traditional and Cultural Leaders have a vital role to play in the fight against Ebola. “Ebola is not a respecter of persons. You must stop all your traditional healings and practices now to save your lives and your community,” she said, and added that traditional medicines do not cure Ebola. “You must stop washing dead bodies, and please take sick people to the nearest health center,” the First lady said.

She warned against exhuming dead bodies, which places one at risk of contracting Ebola virus. She also admonished lactating sick mothers not to breastfeed their babies until proven Ebola free. The First lady concluded by sending a strong message to survivors of the virus to stay out of  sex for the stipulated three months so as to save the lives of their partners.

Madam Marian Murray of Plan Sierra Leone commended the initiative of the First Lady, which she said will contribute immensely to end Ebola in the country. She revealed that her organization has done a lot in the fight against Ebola. Some of their activities undertaken, she said are contact tracing, construction of five community care centers and two holding centers in Port Loko and a Care Centre in Kailahun. She pointed out that with support from the British Department for International Development (DFID), Plan is supporting quarantined homes. “In all of these, we noticed that community initiatives are lacking, which is why we embraced the initiative of the First lady,” she said, and assured that Plan in committed to work with the Office of the First lady to kick Ebola out of Sierra Leone.

Cornelius Deveaux of the Consortium of Secrete Societies in the Western Area shared his experience in the Regional Meetings. The meeting in Makeni was chaired by the Mayor, Madam Sunkari Kabba-Kamara, whilst Paramount Chief Bai Sebora Kasanga II of Bombali Sebora Chiefdom gave the welcome address.