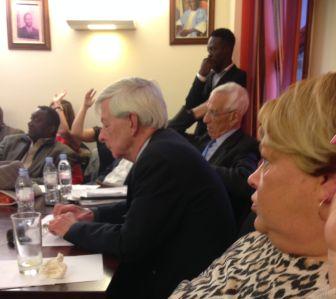 Former British High Commissioner to Sierra Leone has criticized his country’s handling of the Ebola crisis in Sierra Leone.

At an Ebola meeting organized by the Sierra Leone High Commission in London, His Excellency Chief Komrabai Peter Penfold said that Britain’s policy on flights to Sierra Leone is not helping the situation and called on the Sierra Leonean government to put more efforts to get them reverse the decision.

Penfold believes Sierra Leone needs direct air corridors and encouraging flights to use a second route into Britain will just worsening the situation.

“We have to keep on putting the pressure and lobby anyone that is connected with such a decision,” the Diplomat said adding that such a decision will not only undermine the eradication of Ebola but will also affect Sierra Leone’s economic recovery process.

Penfold called on the Sierra Leonean government to start treating Ebola survivors as heroes and by doing so if will help them from being stigmatised by members of the public.

Sierra Leone’s High Commissioner to the United Kingdom His Excellency Edward Mohamed Turay explained the efforts taken by his mission to convince the British overturn such decision and that includes meeting the Deputy Under Secretary of State Department of Trade as well as other key cabinet and Members of the British Parliament as well as the British Foreign Office.

A team of volunteers including Penfold and Sierra Leonean Councillor of Southwark Councillor Strasser and other prominent Sierra Leoneans in the United Kingdom are expected to embark on the mission next week.

Obai Taylor Kamara briefly highlighted some of the mission’s activities including engaging the Sierra Leonean Diaspora community since the Ebola outbreak.