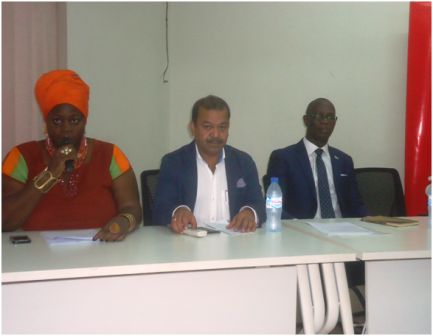 3 December 2014  – Airtel has launched a three months campaign to kick Ebola out of Africa.   Mobile network operators across Africa are partnering with the African Union Commission  (AUC) to support the fight against Ebola in West Africa.  (Photo:  Members of the high table)

Chairperson of the campaign Madam June Rose Johnson said in her opening remarks that Airtel is all set to kick this deadly disease out of Sierra Leone as nine mobile companies have come together to participate in this campaign.  Ms Johnson stated that the campaign  will run between now and the end of February 2015.

Speaking at the campaign, Hon. Palo Conteh said over the last six months everything in Sierra Leone has come to a standstill and every area is affected as nothing is happening in the country.  Infrastructure and education have gone down.   Hon. Conteh expressed his gratitude over the campaign Airtel has embarked on and gave his 100% support so that this campaign will be fruitful.

Minister of Information and Communication Hon Alpha Khan said that Airtel has been a good supporter in the fight against Ebola. Airtel alone paid into revenue Le 113 billion in 2013.  Hon Minister said with this post Ebola strategy, we can defeat Ebola soon. He therefore donated $1M Leones to start the campaign.

Staff of Airtel posing with All Stars

Managing Director of Airtel, Sudipto Chowdhury, said in his statement that the initiative will use an SMS dedicated platform to raise funds for the deployment of African health workers of affected countries. Ebola, he said, has claimed over 5,000 lives across parts of West Africa since its initial report in Guinea in December 2013. The AU is leading this effort under its African Union Support to the Ebola Outbreak in West Africa (ASEOWA) mission, which has so far deployed 90 health workers to the three affected countries.

The SMS fundraising campaign will use the shortcode 7979. Customers will be asked to text ‘Stop Ebola’ to this code in order to donate in their respective countries. For Sierra Leone, Le 1,000 will be deducted from their account every time you text.   Chowdhury expressed his concern over the widows of the Ebola victims and he said Airtel will be working with the Ministry of Social Welfare for scholarships.

Airtel has also signed a $75,000 contract with the All Stars of Sierra Leone to help spread the awareness about Ebola. The All Stars has done a beautiful song  ‘A Song for Hope’.

Sudipto calls on every citizen to come forward as this will bring a change in Sierra Leone.