Homepages
Your trusted place for Sierra Leone and global news
Trending News
HomeFeaturedMangrove Charter for West, Central and Southern Africa in the making

Mangrove Charter for West, Central and Southern Africa in the making 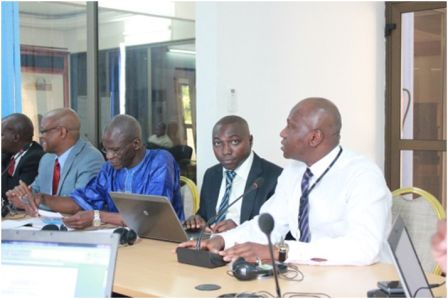 Mangrove Charter for West, Central and Southern Africa in the making

ABIDJAN 3 December 2014 – Once an abundant resource along the coast and riverine areas in West and Central Africa mangroves are fast being degraded; thereby accelerating ecological damage and impoverishing further the thousands of people who depend on this coastal ecosystem.   (Photo: © Abidjan Convention Secretariat Right: For Abidjan Convention Secretariat Regional Coordinator Abou Bamba the mangrove  protocol will be a historic document.)

Arresting this trend has become a matter of urgency for the two subregions. Concerned, the Abidjan Convention “corralled” 20 marine scientists and lawyers in Abidjan 25-27 November to draft a document transforming an existing subregional charter on mangrove management into an additional protocol of the Abidjan Convention.

“We are embarking on a historic act on mangroves,” Abou Bamba, the Abidjan Convention regional coordinator, said at the opening of the meeting. “Once complete, the protocol will be the only legally binding instrument on the management of mangroves on the continent.”

That legal requirement, Law of the Sea Professor Yacouba Cisse said on Tuesday, was the main value of converting the charter to a protocol, which will also cover South Africa.

“It would ensure better protection of mangroves,” Cisse added, “and stipulate exactly the legal obligations and responsibilities of all state parties in protecting this ecosystem.”

The charter was signed in Nouakchott in 2010 by just six countries, all of them member of the Regional Partnership for the Preservation of the Coastal zone and Marine in western Africa, or PRCM. A charter can mean that each country decides its own way of managing mangrove regulations. The lack of a harmonized subregional framework has been, therefore, a major weakness, especially as mangroves straddled some borders. A protocol for the Convention would largely rid the region of this weakness as it would compel all 17 signatories of the 22 nations in the Convention area to protect their mangrove ecosystems with the same set of guidelines and rules.

©Abidjan Convention Secretariat. Panel of Experts debate the convertion of a subregional Mangrove Charter to an additional protocol of the Convention

“For non-state parties this would be more of a moral obligation,” Cisse said of the seven nations not yet signatories to the Convention.

The draft additional protocol should be ready in March 2015, after which it will go to the signatory countries of the Convention for review before being submitted to environment ministers at the next Conference of Parties in 2017.

At a similar conference in 2012 held in Brazzaville, the ministers mandated the Convention to convert the subregional charter of West Africa into an additional protocol of the Convention. In doing so, the Convention secretariat has struck partnership with organizations engaged in sustainable mangrove management to develop an “action plan” to support the transformation of the charter into a protocol. These partners include the International Union for the Conservation of Nature, Wetlands International, PRCM, and the Swedish International Development Agency.

Presentations by the panel of experts at the seminar covered certain aspects of the region’s mangrove concern. These presentation topics were: Challenges and Prospects for Sustainable Management; The Charter for a Sustainable Management of Mangroves in West Africa;  Concerted Mangrove Management Experiences in Southern and Central Africa; Revision of the Mangrove Charter Considering Other LME’s Issues; and the Development of Mangrove Ecosystems in the Carbon Market.

This and other causes of degradation are strikingly similar in West and Central Africa. Vast amounts of mangrove wood are required for making salt, smoking fish and charcoal making for domestic use and commercial sale. For example, Sow said 5kg of mangrove wood were needed to make 1 kg of salt. Côte d’Ivoire’s mangroves in the lagoons of Fresco, Grand Lahou, Ebrié and Aby are in a state of severe degradation. A researcher at the Ivorian Oceanographic Research Centre in Abidjan, Yacouba Sankhare, said the country had lost 41per cent of its mangroves to fish smoking alone.

Other causes include rice irrigation, rapid urbanization, the building of dykes, hydroelectric dams, agro-industrial pollution, and the deposit of urban waste and marine liter. Hydoelectric dams are closing off inland lakes and limiting the natural transport of silt to the coastal ecosystem.

In Cameroon, Gabon and the two Congos, rapid urbanization and coastal infrastructure development are the greatest causes of mangrove loss. Sand mining, oil and gas exploitation, lack of adequate laws to protect mangroves are other causes. Nutrients from phosphates, detergents, fertilizers or raw sewage cause algae which can smoother plants are another cause. This leads to severe loss in water quality.  In turn, this affects fisheries and the micro-organisms that birds eat, and bird hunters. Invasive plants such as the Nypa Palm in Nigeria can flourish in such environments and have been strangling natural mangrove ecosystems. Yet that country has tried to turn that misfortune into an economic gain by harvesting the Nypa and making it into goods.

Without sustainable management of mangrove ecosystems, there can be no economic benefit from these sources. There would be no sanctuary for spawning fish, a source of oysters and a host of other sea products. Mangroves also regulate ocean tidal waves and water quality; the ecosystem serves as a silt deposit trap, as a buffer against coastal erosion and as invaluable carbon sinks.

As carbon sinks mangroves have a market value. Speaking to this issue, Yannick Beaudoin, head of Grid-Arendal’s marine programme, gave the example of the Mikoko Pamoja project in Kenya. Here, the payment for ecosystem carbon services has enabled the creation of jobs, ecotourism; and the  payment of education, water and sanitation.

The Niger Delta mangrove system of Nigeria – the largest in West and Central Africa  – support the endangered manatee and the pygmy hippopotamus. In other areas they host turtles, crocodiles, some species of monkey and migrating birds.

The additional protocol to the Abidjan Convention should be able to speak to all these concerns.

The consequences of the loss of mangrove ecosystem and its resource value would mean increased coastal erosion and sedimentation, flooding and even Tsunamis, and further impoverishment of coastal populations. However, if implemented after adoption the mangrove protocol could serve as a blueprint for other areas of Africa.

“It would help ensure an ecosystem well able to meet the social, cultural and economic needs of tens of millions of coastal dwellers into the foreseeable future and be the true illustration of the ecosystem-based management approach,” Bamba said.