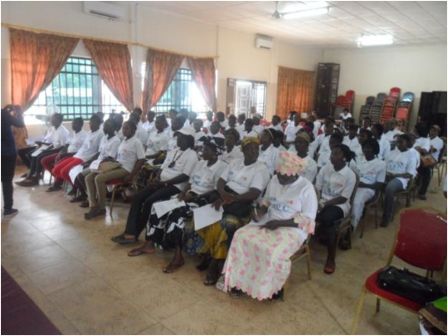 Over the weekend, the Women’s Forum prepared community leaders in the Bombali and Tonkolili Districts respectively for “Life After Ebola” for their adolescents.  (Photo: Participants during the training)

According to the President of the Women’s Forum, Mrs. Maude Peacock, in accordance with the National Strategy for the Reduction of Teenage Pregnancy launched by His Excellency the President in May 2013, which was followed by that of the First Lady of Sierra Leone supported by the First Lady of Nigeria, the Women’s Forum passionate about the empowerment of women and girls, embarked on life skills training for adolescent leaders in schools and girl mothers in the communities for the reduction of teenage pregnancy in the Eastern, Southern and Western Regions of Sierra Leone in 2013.

Monitoring the impact of this training in the Western Area, Principals and Counselors revealed that the girls in their respective school clubs are impacting other girls.

With the outbreak of the Ebola epidemic, the project has been justifiably stopped.

Under normal circumstances, according to UNICEF’s 2012 surveys, 21% of school going girls is sexually active and 15% drop out of school due to teenage pregnancy.

The Women’s Forum regards this period in the development of the girls as “unnormal circumstances.”

Reports from all the regions indicate that the situation has been exacerbated.

Something should be done for these adolescents because there is “life after Ebola.”

Encouraged by the National Coordinator for the Reduction of Teenage Pregnancy in the Ministry of Health and Sanitation and the Ministry of Social Welfare, Gender and Children’s Affairs, with firm support from UN Women, and equipped by UNFPA, the Forum’s Teenage Pregnancy Reduction Project was reprogrammed to Adolescent Reproductive and Maternal Health in the context of the Ebola outbreak because teenage pregnancy is very much so a reproductive health problem.

The goal of the project is to equip adolescent girls with the appropriate knowledge on Ebola and to protect them from health and other threats thus elevating their status in the communities.

The target groups are adolescent girls in Bombali and Tonkolili District, disaggregated according to age, groups and situations.

120 girls from each District with multiplier impact on other girls, girl survivors, community members as monitors and health workers.

After the mapping exercise in the two Districts, the Women’s Forum over the weekend sensitized community members on their various roles in preparing the girls for positive growth and the significance of education either formal or non-formal in the  lives of the adolescents.

Learning is better than silver and gold.

This was demonstrated by the eleven-year civil war.

The sensitization ended up by the signing of a contract between the Forum and eight (8) community leaders.

The Forum is to train leaders/monitors on life skills etc etc.

Among the obligations of members of the community are the provision of “Safe Spaces” for social interaction of the girls in Bombali and Tonkolili Districts, to ensure that they participate in programs, to ensure that girls stay in school or take up a vocation and to develop bylaws.

It is hoped that Women’s Forum will replicate this project in other parts of the country.