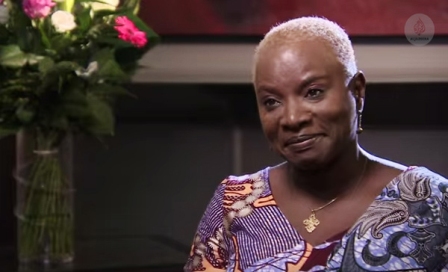 On this weekend’s episode of Talk to Al Jazeera, Benin’s Grammy-winning singer Angelique Kidjo criticized the Western media’s depiction of Africa, particularly since the Ebola outbreak.

“Do you think everybody in Africa has Ebola?” she asked presenter Barnaby Phillips. “That’s the image you give to people.

“We didn’t invent Ebola. It’s just a disease that exists there. Like, are we going to be blamed for inventing malaria too?

“If there is an Ebola outbreak in the Western world, will the media in the West treat it the same way?”

She also expressed her frustration with the way Western media portray Africa as a continent steeped in violence, victimhood and corruption. “A success story in Africa doesn’t interest any media,” she says. “They are so eager and hungry for horrible stories from Africa. Why?

“It looks like the West is the hyena, feeding on the misery of the African people. They should be ashamed doing this.”

On the topic of terrorism, she is crushing in her criticism of ISIS but urges an analysis of why young people are joining the group.

“The question is not asked here,” she says. “Everybody wants to fight ISIS. Why can’t we just do something better for people and remove the legitimacy of all those crazy extremists that are there just for the pleasure of killing people and for power?”

Kidjo, now in her 50s, has just written her life story, Spirit Rising, and released a new album, Eve. She‘s still recording and touring at a hectic pace, but where does she see her musical career going from here?  And with Africa facing new challenges – from Ebola to Islamist extremists opposed to girls’ education – does she feel optimistic about the future of her beloved continent?